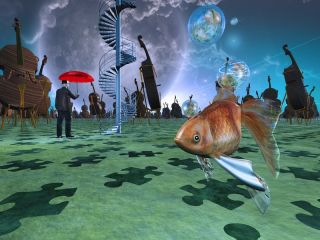 About 1 in 20 people in the general population has experienced at least one hallucination in their lifetime that wasn't connected to drugs, alcohol or dreaming, according to a new study.

Researchers analyzed information from more than 31,000 people in 18 countries who were interviewed as part of a mental health survey from the World Health Organization. Participants were asked whether they had ever heard voices or seen things that didn't exist, or if they had experienced a delusion (a false belief), such as the thought that their mind was being controlled or that they were being followed.

"We used to think that only people with psychosis heard voices or had delusions, but now we know that otherwise healthy, high-functioning people also report these experiences," study co-author Dr. John McGrath, a professor at the Queensland Brain Institute in Australia, said in a statement.

"People should be reassured that there isn't anything necessarily wrong with them if it happens once or twice," McGrath said. "But if people are having regular experiences, we recommend that they seek help."

Psychotic experiences were slightly more common in women than in men: Among the women surveyed, 6.6 percent had experienced hallucinations or delusions at some point, compared with 5 percent of men. People were also more likely to have psychotic experiences if they were unmarried versus married, or unemployed versus employed, the study found.

According to the National Institutes of Health, hallucinations can be normal in some cases. For example, after a loved one dies, some people hear the person's voice, or briefly think that they see the loved one, which can be part of the grieving process, the NIH says.

Dr. Alan Manevitz, a clinical psychiatrist at Lenox Hill Hospital in New York City, said that a number of psychiatric and medical conditions are linked with having hallucinations or delusions. These conditions include personality disorders, post-traumatic stress disorder, obsessive-compulsive disorder, brain tumors, thyroid disorders, epilepsy, and certain infectious diseases and medications. Women can also experience postpartum psychosis (or psychotic symptoms after childbirth) that can include hallucinations, Manevitz said.

The doctor said he recommends that anyone who has a psychotic episode, such as a hallucination or delusion, should speak with his or her doctor, and undergo tests to rule out serious conditions. "What you want is to speak with someone who's knowledgeable about it to make sure that this temporary loss of contact with reality is brief, and not due to other causes," Manevitz said.

Manevitz noted that many people with psychiatric illness do not know that they have a mental condition, and so some people in the study could have had a undiagnosed psychotic disorder. In addition, some people may have experienced hallucinations or delusions as a result of drug use, but they did not attribute the psychotic episode to the drug use because the episode occurred days later, Manevitz said.

The researchers said they hope to learn more about why some people experience isolated episodes of hallucinations and delusions, while other people progress into more serious disorders such as schizophrenia, McGrath said.

"We need to understand why it's temporary for some people and permanent for others. We can use these findings to start identifying whether the mechanisms causing these hallucinations are the same or different in both situations," McGrath said.

The study is published online today (May 27) in the journal JAMA Psychiatry.