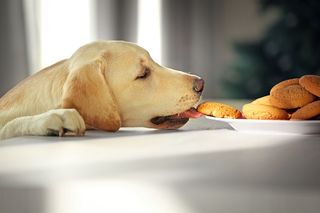 You should always be careful about what you let your dog eat — case in point, a common sugar substitute found in everything from chewing gum to peanut butter can be deadly for man's best friend, according to the U.S. Food and Drug Administration (FDA).

This week, the FDA warned pet owners about the dangers of xylitol, a type of sugar alcohol that is sometimes found in sugar-free foods. Although the substance is safe for humans, it can be poisonous for dogs. Over the last several years, the agency has received reports of dogs being poisoned by eating foods that contain xylitol.

Many of the poisonings occurred when dogs ate sugar-free gum, the FDA said. But xylitol can also be found in other food or consumer products, including sugar-free candy, breath mints, baked goods, sugar-free (or "skinny") ice cream, toothpaste, cough syrup, and some peanut and nut butters. [These 7 Foods Cause the Most Pet Deaths]

When dogs eat xylitol, it is quickly absorbed into the bloodstream and causes a rapid release of insulin, the hormone that helps sugar enter cells. This insulin spike may cause dogs' blood sugar levels to plummet to life-threatening levels, a condition known as hypoglycemia, the FDA said. In humans, xylitol isn't dangerous, because it does not stimulate the release of insulin.

Signs of xylitol poisoning in dogs — including vomiting, weakness, difficulty walking or standing, seizures, and coma — typically occur within 15 to 30 minutes of consumption, and deaths have occurred in as little as 1 hour, the FDA said.

To protect your dog, the FDA recommends checking food labels for xylitol, particularly if the product is advertised as sugar-free or low sugar, said Martine Hartogensis, a veterinarian at the FDA. "If a product does contain xylitol, make sure your pet can't get to it," Hartogensis said in a statement.

This also applies to products you might not think of as food, such as toothpaste, which your dog might still attempt to eat.

And if you give your dog peanut or nut butters as a treat or vehicle for pills, you should also check the label to make sure the product doesn't contain xylitol, the agency said.