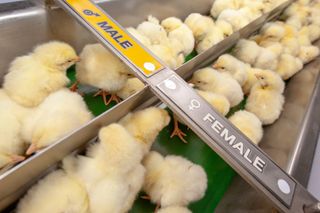 For the first time, researchers have used genetic engineering to almost completely eliminate male babies in the womb of a mammal— though that mammal was a mouse. And don't expect the treatment to wind up in an IVF clinic near you — the process also required genetically altering both parents.

The study was published July 1 in the journal EMBO Reports.

The researchers used CRISPR to selectively target and snip genes that code for three enzymes essential to embryonic development. The end result? A 95% reduction in the number of male babies born. [10 Amazing Things Scientists Just Did with CRISPR]

The researchers were able to suppress the enzymes in just male embryos by targeting the system most mammals use to determine sex.

Anu Bashamboo, senior group leader in the Unit of Human Developmental Genetics at the Institut Pasteur in Paris, acknowledges the study as a breakthrough but notes the procedures need fine-tuning.

"It is clear from the data the system is still not perfect," Bashamboo, who was not involved in the study, told Live Science. "The protocols and experimental design need to be optimized to ensure the elimination of all male lineages as early as possible after fertilization."

And some of the males survived and one suffered severe deformities, Bashamboo added.

The researchers presented their study as a proof of concept that clears the way for use in agricultural settings, where either male or female livestock are preferred.

"The next step is to transfer it to other animals besides mice — like cows, goats and chickens," Qimron told Live Science.

For instance, in industrial farming, female chicks are kept as eventual egg-laying hens, while male chicks are killed in the billions, often gassed, electrocuted or ground up alive within hours of birth, National Geographic reported.

"It can also be the other way, because in the beef industry males are more wanted because they have more muscles and produce more meat," Qimron said.

Though their current work is focused on eliminating male offspring, the researchers believe they could engineer a similar system that prevents the development of female embryos.

Qimron said the method could "in principle" be used to select for sex in human offspring, but he is not worried that the research will lead to unethical use in humans.

"I find it hard to envision such a malpractice," he said.

Jiankui He's 2018 claim to have produced genetically edited infants has heightened global concern about the possibility of manipulating the genomes of embryos. Regulators in the United States and Europe have placed stark limits on what geneticists can do in humans.

"There are strict regulation[s] and guidelines in place for genetic editing of human embryos, and implantation of modified embryos is strictly forbidden as per FDA regulations," Bashamboo said.

Though he thinks it's unlikely, Qimron doesn't rule out the possibility that his work might be used somewhere in the world.

"If a mad ruler in some closed country decides that he wants two lines of human — one producing soldiers and the other producing females for other purposes — it may happen with this technology," he said. "The proof of concept is there."