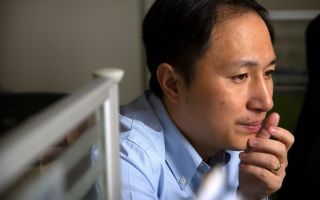 In this photo captured Oct. 10, 2018, scientist He Jiankui works at a lab in Shenzhen in southern China's Guangdong province. China's government ordered a halt to work by a medical team that claimed to have helped make the world's first gene-edited babies.
(Image: © Mark Schiefelbein/AP/Shutterstock)

A Chinese researcher who ignited controversy in 2018 after claiming to have created the first genetically edited human infants was recently spotted in Shenzhen, China.

This is the first reported sighting of Jiankui He, an associate professor at the Southern University of Science and Technology of China, in weeks, The New York Times reported Dec. 28.

He was photographed while on the fourth-floor balcony of an apartment building — a university guesthouse — and was seen talking to a woman thought to be his wife. The apartment appeared to be monitored by "a dozen unidentified men," according to The Times. [10 Amazing Things Scientists Just Did with CRISPR]

He last appeared in public in November at the Second International Summit on Human Genome Editing in Hong Kong, where he spoke about his research and fielded outraged queries from the global scientific community. Since then, He's whereabouts have been uncertain, though rumors suggested he was under house arrest, The Times reported.

According to He, the babies — twin girls named Lulu and Nana — were genetically modified as embryos with a gene-editing tool called CRISPR-Cas9; He used CRISPR to snip out a gene and thereby render the infants resistant to HIV, he said in a video posted to YouTube on Nov. 25.

However, scientists around the world promptly denounced He's actions as highly irresponsible and potentially harmful to the babies. Genes perform more than one function and act in concert with many other genes, and it is not yet possible to say for sure that excising a single gene can be done safely and with no future consequences for human health, Live Science previously reported.

In fact, the gene that He deleted in the embryos — CCR5 — is known to assist in white blood cell function, Mazhar Adli, a geneticist at the University of Virginia School of Medicine, told Live Science. He may also have failed to adequately inform the babies' parents about potential risks prior to obtaining their consent to the gene editing.

Following the release of the video, He's university quickly denounced his research, issuing a statement the next day stating that it was "deeply shocked" at what He had done and claiming that He had been on unpaid leave from the university since February.

In the weeks after the Hong Kong conference and the launch of an investigation by the Chinese government, He's location was uncertain and university representatives denied that he was being held under house arrest on university grounds, Newsweek reported.

However, He's current location is a university hotel that houses visiting scholars, according to The Times. Four guards were stationed outside the door of He's apartment, but their affiliation is unknown. Neither Shenzhen's police department nor the university responded to The Times' requests for comments, The Times reported.