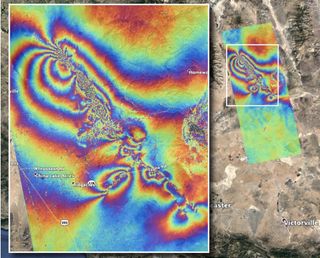 Two recent Southern California earthquakes warped the ground across dozens of square miles — and the changes are visible even from space.

A Japanese satellite picked up damage from the July 4 and 5 earthquakes that had magnitudes of 6.4 and 7.1, respectively. Quakes of these magnitudes are strong enough to cause moderate to severe damage to buildings.

The July 5 earthquake was the strongest to hit the Ridgecrest region (150 miles, or 241 kilometers, northeast of Los Angeles) in 40 years, according to the U.S. Geological Survey. The surface displacement caused by this temblor and its predecessor is clear in new images from Japan's Advanced Land Observing Satellite (ALOS-2) satellite.

That satellite gathers data using a technique called synthetic aperture radar, which produces detailed measurements of the height of Earth's surface. Scientists at NASA's Jet Propulsion Laboratory (JPL), which is also located in Southern California, created a map based on the data.

Each color band represents 4.8 inches (12 centimeters) of ground displacement within the radar instrument's line of sight, JPL said in a statement. The most "noisy" areas, which appear the most muddled in the image, are likely where the ground was broken up by the earthquake. In the southeast corner of the image, linear features appear to slice through colored whirls and likely mark where the surface was sliced open by the quakes.

The USGS and the California Geological Survey, as well as other scientists, will use the map to assess damage and map the new faults. The region has also experienced 1,000 aftershocks that opened up a few cracks.

Scientists are working closely with NASA's Earth Science Disasters Program (as well as many other partners that include the Federal Emergency Management Agency) to figure out how best to respond to the earthquake, JPL added.

The pair of earthquakes caused devastating damage to homes but no reported deaths or major injuries, according to news agencies.