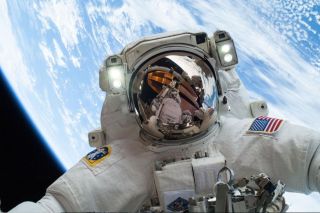 But a new study has some good news: Space radiation doesn't seem to increase astronauts' risk of death from cancer or heart disease, at least not at the doses they experienced during historical missions. Still, longer missions — such a mission to Mars — will likely come with much greater radiation doses that could pose larger health risks, the authors said.

Space travel exposes the body to higher levels of ionizing radiation than those typically experienced on Earth. And at high doses, that radiation has been tied not just to cancer and heart disease, but to a host of other health problems as well.

Previous studies haven't found a link between space travel and an increased risk of death from cancer or heart disease; but since relatively few people have traveled to space, these studies may have been too small to detect such a link, the authors said. [7 Everyday Things That Happen Strangely in Space]

The new study analyzed information from 418 space travelers, including 301 NASA astronauts who had traveled to space at least once since 1959, and 117

Russian or Soviet cosmonauts who had traveled to space at least once since 1961. These participants were followed for about 25 years, on average.

The researchers used a special statistical technique to determine whether deaths from cancer and heart disease likely had a common cause — in this case, the common cause would be space radiation. But their results did not point to a common cause of death.

"If ionizing radiation is impacting the risk of death due to cancer and cardiovascular disease, the effect is not dramatic," the authors wrote in their study, published July 4 in the journal Scientific Reports.

"It is important to note that future missions of deep space exploration will likely offer much greater doses of space radiation than have historical doses, which will lead to a different risk profile for future astronauts and cosmonauts," the authors said. Future studies should continue to surveil astronauts "for potential harmful effects of exposure to space radiation," they concluded.