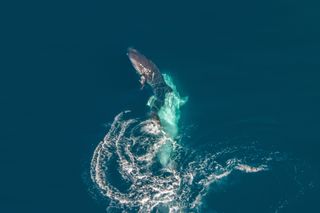 A 30-foot-long male whale shark sidles up to a juvenile female, hoping to mate (they didn't). This aerial photo, taken over Ningaloo Reef in Australia, is the first known observation of a whale shark mating ritual.
(Image: © Tiffany Klein/Ningaloo Aviation)

Fact: Whale sharks — the largest known fish in the sea and some of the largest creatures on Earth — exist. That means they must be reproducing.

Despite this, scientists have never actually seen two whale sharks mating. This is partly because the animals are endangered; whale sharks are so large — averaging about 32 feet (10 meters) long and weighing tens of thousands of pounds — that they are highly susceptible to human threats like drilling, fishing and shipping. Scientists also suspect that the fish migrate enormous distances through the world's tropical seas to reach special whale shark mating grounds, which researchers simply haven't located yet. [Gallery: The Mysterious Lives of Whale Sharks]

Now, thanks to a fortuitous flyby in Wwestern Australia, biologists are one step closer to learning how whale sharks make the proverbial beast with two humpbacks. While flying over Australia's Ningaloo Reef in mid-June, commercial tour pilot Tiffany Klein spotted an adult male whale shark trying to catch a juvenile female's attention by zigzagging through the sea for more than an hour — and then, unsuccessfully, trying to mate with her.

Klein pointed out the frisky whale to nearby researchers from the Commonwealth Scientific and Industrial Research Organisation (CSIRO), Australia's federal science agency. CSIRO researchers observed the encounter from sea while Klein photographed from above, effectively providing the world's first record of whale shark mating behavior.

"Whether he was successful or not, this is the first time we've seen an attempted copulation by a male whale shark with a female," George Burgess, director emeritus of the Florida Program for Shark Research, told Live Science. (Burgess did not witness the recent sighting.) "We still don't know what the mating behavior of a mature female would be, but it's one step forward in our understanding of whale shark reproductive biology."

In an interview with the Australian Broadcasting Corporation, Klein and the CSIRO researchers described the male's behavior as "erratic," swimming in zigzags and making sudden dives much deeper than an adult male normally would. Burgess said this can be interpreted as the sort of peacocking behavior seen in many male mammals and birds, which is designed to get a female's attention and show off the potential suitor's viability.

Because the encounter took place very close to the surface, where whale sharks tend to hang out eating the plankton that makes up much of their diet, it's possible that the young female was feeding and didn't even notice the male's "hot-to-trot" display, Burgess said.

When the male shark finally did approach the female, he swam up from below. This is not unusual for sharks, Burgess said, as males copulate with one of their two claspers — essentially, a pair of very flexible penises — that allow the males to approach mates from multiple angles. The tips of this male’s claspers were spread, or "flared," the researchers noted, meaning he clearly had mating on the mind.

Because the male shark here was fully grown (measuring about 30 feet, or 9 meters), however, and the female was still a juvenile, she rejected his advances and swam off. What drove the male to try and reproduce with a young shark who wasn't ready? It may have been simple desperation, Burgess said, as Ningaloo Reef is populated mainly by immature male sharks, suggesting it is not a common reproductive site.

"This big male came in, couldn't find an adult female to mate with, and made an attempt on a juvenile female anyway," Burgess suggested.

Though the mating attempt was doomed to fail, it still provides researchers with an invaluable opportunity to learn about one of the most elusive mating rituals in the sea. Because whale sharks are a protected species, researchers aren't allowed to capture them for study.

Still, not all seafarers play by the rules. In 1995, for example, a pregnant female whale shark was harpooned by a commercial fishing vessel in Taiwan. When she was later dissected, 300 pups were found developing inside her. Scientists may still not know how, exactly, these giants of the deep go about mating — but, whatever they're doing, it seems to work.