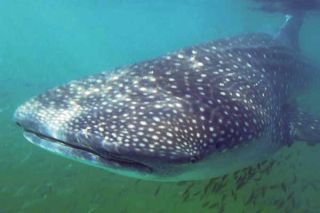 The filter-feeding whale shark can grow as long as a school bus.
(Image: © Jennifer Schmidt, University of Illinois at Chicago.)

The giant whale shark is an elusive quarry for study, especially when it comes to spotting the spotted sharks' mating and breeding. But a new analysis of rare whale shark embryos suggests that females may save up sperm after mating, queuing up multiple litters of the filter-feeding fish.

The study, a genetic analysis of 29 embryos saved from a female whale shark caught near Taiwan in 1995, found that despite being in very different stages of development, all of the embryos had the same father.

Though cautious about drawing conclusions from the study of a single shark, study leader Jennifer Schmidt, a biologist at the University of Illinois at Chicago said the data suggest female whale sharks mate once, store the sperm and fertilize their own eggs (which develop into embryos) as they're produced.

"If mating occurs randomly when a male and female happen to meet, this would provide the female with a sort of reproductive 'insurance policy,'" Schmidt told LiveScience. "She has sperm available to continue to fertilize her own eggs even if she doesn't encounter another adult male."

At anywhere from 18 to 40 feet (5 to 12 meters) in length, whale sharks are the largest fish species. They live in warm waters worldwide, but researchers usually get to study them only in coastal waters where young juvenile males cluster to feed. Much of the sharks' lives seem to occur in the open sea, where they're hard to observe. No one has ever seen whale sharks mate.

Nor are pregnant females a common sight. The first (of just three ever reported) was caught in 1995 in Taiwan. She had 304 embryos in her uterus, ranging in development from 16-inch (42-centimeter) embryos in egg cases to 2-foot (64-centimeter)-long, near-term embryos living free in the womb. (Like some other fish and reptile species, whale sharks hatch from eggs inside the mother's uterus and are then born alive.)

After 15 years, only 29 of the embryos had been frozen and saved, but they ran the gamut from very young to almost viable. Using genetic analyses — essentially, a shark paternity test — the researchers were able to determine that all of the sharks very likely had the same dad.

The findings surprised the researchers, because most sharks that have been studied give birth to litters of half-siblings after females have mated with lots of male sharks at once. Though it's possible the female whale shark mated with the same male again and again over time, that sort of monogamy is unheard of in sharks. More likely, Schmidt said, the sharks met once and the female stored the sperm, enabling her to start new pregnancies at her leisure.

By queuing up births, the sharks may be able to carry more embryos at once. They may also avoid putting all their eggs in one basket, so to speak. By giving birth to lots of babies all at once, other sharks might risk their offspring becoming an all-you-can-eat-buffet for predators. Having a few at a time in different locations spreads out that risk.

Schmidt isn't sure how long whale sharks can store sperm, or how many times they mate. Firm conclusions about a whole species can't be drawn from one shark. It's possible, though statistically unlikely, that there was another shark dad, whose resulting embryos weren't saved for testing. It's also possible that whale sharks do mate with multiple males, but that this particular shark hadn't. A final possibility is that two sharks with near-identical DNA contributed to the litter, and the current test missed the differences between the two. As the test is capable of picking an individual out of a population of a billion whale sharks, this last possibility is very unlikely, the researchers wrote online Aug. 4 in the journal Endangered Species Research.

Replicating the study will be difficult. The whale shark is listed as "vulnerable" by the International Union for Conservation of Nature, and it is protected from capture around the world. The few that are found in aquariums are usually less than 25 years old and not sexually mature. Female adults only gather in a few spots worldwide, mostly in the Sea of Cortez and near the Galapagos Islands. Researchers are now trying to understand what's special about those spots and whether pregnant females can be studied there.