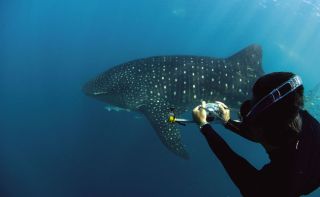 Diver Brad Norman helped to draft the guidelines for photographing whale sharks. Divers who take their own shots can log them on www.whaleshark.org.
(Image: © Brad Norman)

Whale sharks, which grow to weigh as much as two or three adult elephants, are thriving in waters off Western Australia, a new study of underwater images suggests.

Up to 65 feet long (20 meters), the whale shark, Rhincodon typus, is the world's largest living fish species — and also the largest shark. Though hefty, this shark is known as the "gentle giant" for its non-predatory behavior. Rather than tearing through meaty flesh of prey like many sharks, this fish, with its broad, flattened head and tiny teeth inside a giant mouth, eats tiny zooplankton, sieving them through a fine mesh of gill-rakers.

Relatively little is known about the health and migratory behaviors of whale sharks, which live in tropical and warm seas, including the western Atlantic and southern Pacific.

The new research combines computer-assisted photographic identification with data collected by ecotourists, among others, and suggests whale shark populations in Ningaloo, Western Australia, are healthy, although research at other locations, such as South Africa and Thailand, has reported declines in population size.

Swimming alongside each whale shark in the Ningaloo Reef, the researchers photographed or video-taped the white lines and spots along the flanks of the animal. Like a human fingerprint, the patterns of speckles and stripes on the skins of whale sharks are thought to be unique to each individual.

Based on 5,100 underwater images of 355 whale sharks contributed by hundreds of researchers, divers and ecotourists, Norman, Holmberg and Arzoumanian obtained almost 10 times more data than any previous study.

“To study whale sharks in a meaningful way, we really had to rethink how we collect data and how we analyze it,” Holmberg said. “The results surpassed our expectations, allowing hundreds of individuals to contribute and providing the necessary data to obtain a closer look at the population’s health.”

Ningaloo Reef is one of the best locations to find whale sharks, especially between April and June. The researchers found that more whale sharks are returning to the northern area of Ningaloo Marine Park from season to season, suggesting the population is growing. They found that about two-thirds of the sharks were repeat visitors, while one-third were sighted only once during the study period.

As a rare and highly migratory fish, whale sharks are a big draw for Ningaloo’s ecotourism industry, where tourists pay to get close views and even swim with the sharks. In spite of their gargantuan size, whale sharks are fairly docile; the main risk to humans comes from getting in the way of their very large and powerful tails.

The authors say their study, published in the Ecological Society of America’s January issue of the journal Ecological Applications, suggests that the management guidelines for whale shark ecotourism at Ningaloo appear to be on target.

“Applying these guidelines to other locations along whale shark migration routes may offer a viable alternative to hunting these fish, one that yields both economic and conservation benefits,” Norman said.