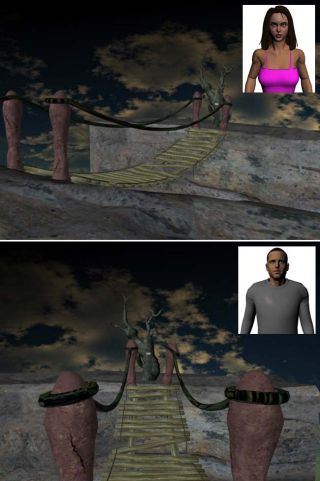 Male test subjects, wearing virtual reality helmets, were asked to walk across this shaky bridge over a deep valley in the presence of this virtual woman, or a virtual man, while a real scientist (man or woman) was present in the experiment room.
(Image: © Jeroen Derks, Journal of Evolutionary Psychology.)

Even in virtual-reality settings, men will take risks to impress the opposite sex.

Past research found that males take more risks when someone is watching. However, it was uncertain whether this showing off was aimed more at other males or females. For instance, male pedestrians are more likely to cross busy roads if females are watching, but male drivers are less likely to wear seatbelts if male passengers are present.

"Risk-taking is a significant cause of vandalism, injury, and even death — as such, risk-taking affects not only the risk taker, but also other people," said experimental psychologist Willem Frankenhuis at the University of California at Los Angeles. "For this reason, understanding male risk-taking has practical implications — for example, prevention of drunk driving."

To uncover the roots of such risky business, Frankenhuis and his colleagues turned to virtual reality. They reasoned that by doing so, they could expose volunteers to hazards that are too dangerous to subject people to in real life but at the same time make them feel in peril, enough perhaps to reveal what might actually cause men to overcome their fears and show off. With virtual reality, the scientists could also precisely manipulate every aspect of the environment, allowing control over variables that might otherwise confound experiments.

The researchers had 72 men don virtual reality helmets and, from their point of view, cross a computer-simulated rope bridge 4 feet wide and 23 feet long that was suspended over a steep, ominous valley.

"When participants looked into the valley, the depth was mind-boggling," Frankenhuis recalled. "If we would ask a colleague to step off the bridge for fun, it was interesting to see several seconds of uncomfortable hesitation — I felt the same way when I tried it myself."

In actuality, the volunteers were walking around a large empty room.

"It was particularly amazing to see participants' first steps on the bridge — the moment where they move from 'solid land' onto the 'shaky rope bridge,'" Frankenhuis said. "Being outside the virtual world, you can see them put the tip of one of their feet forward, gradually bending it to touch the bridge — in reality, the floor. Then they slowly set foot and convince themselves to put the weight on their leg. The hesitation was striking — it really took them some time."

All the volunteers were heterosexual men. Each also had a scientist, either a man or a woman, oversee the experiment for safety reasons.

These findings seem to support the idea that male risk-taking is aimed primarily at impressing females. Another possibility is that the attention from women in these experiments — both real and virtual — made the volunteers feel better about themselves, enabling them to cross the bridge faster with less fear. Yet another alternative is that volunteer speed increased when they had two females watching them as opposed to just one.

Future research could readily confirm there are situations where male risk-taking is instead aimed at impressing other males, Frankenhuis said.

"One possibility to consider is that males may be more interested in showing off particular attributes to females and other attributes to males, because these different attributes are evaluated differently by the two sexes," he noted. "Males may sometimes want to instill fear in other males and may use risk-taking to do so — for example, hitting one's fist against a wall. Such desire to instill fear may be less relevant, though not absent, with members of the opposite sex.  In contrast, a male may be more likely to take other kinds of risk in the presence of females — for instance, heroic acts to save an animal — if the male believes this form of care is particularly valued by females."

Also, "varying the properties of the avatars would be a very interesting line to pursue," Frankenhuis said. For instance, one could imagine varying the masculinity or femininity of either the virtual males or females or tinkering with how abstractly or realistically or attractively they are depicted, as either "will provide insight into the psychology that underlies the effects," he noted.

The scientists detailed their findings in the March issue of the Journal of Evolutionary Psychology.