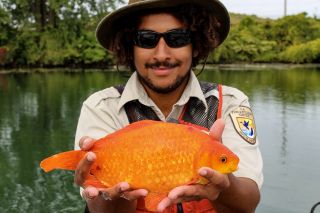 Goldfish that are illegally released in the wild can grow significantly bigger than fish that are confined to an aquarium.
(Image: © Courtesy of Buffalo Niagara Waterkeeper )

A monstrously huge goldfish was recently captured in the Niagara River in New York. The goldfish was presumably a discarded house pet that may have been illegally released or survived a traumatic flush down a toilet.

Buffalo Niagara Waterkeeper (BNW), a nonprofit working to protect and restore the Niagara River and Lake Erie watershed, caught and photographed the giant goldfish in the river's Black Rock Canal, sharing an image in a Facebook post on June 14. [In Photos: Thousands of Goldfish Swarm in Colorado Lake]

In the photo, Marcus Rosten, an employee of the nonprofit, cradles the fish in two hands; the orange leviathan measured a whopping 14 inches (36 centimeters) long, according to the post.

An even more supersized goldfish was nabbed in California's Lake Tahoe in 2013; it weighed in at just over 4 lbs. (2 kilograms) and measured nearly 2 feet (61 cm) long.

Goldfish (Carassius auratus auratus) are native to eastern Asia and belong to the carp family. They usually reach about 1 to 2 inches (3 to 5 cm) in length when they live in aquariums or small fish tanks; at most, they grow to about 6 inches (15 cm) in captivity, according to the New York State Department of Environmental Conservation (DEC).

But when goldfish are released into streams and rivers, they often grow to be 12 to 14 inches (31 to 36 cm) long. The first sightings of goldfish in New York waterways date to 1842; more than a dozen other states also noted the appearance of goldfish in rivers and streams by the end of the 19th century, according to the U.S. Geological Survey.

Today, goldfish can be found in waterways across New York State, "the result of illegally released pets or escapees from bait buckets," the DEC reported.

The fish can survive year-round in the Lake Erie watershed, and goldfish reproduce very quickly; a handful of goldfish released into a Colorado lake in 2012 multiplied to number in the thousands just three years later.

Invasive goldfish directly compete with native fish, and in large numbers, they upset the natural biodiversity of vulnerable freshwater environments, a BNW representative told Live Science in an email.

"Aquatic invasive species that don't naturally belong in the Great Lakes, like this goldfish, are a constant threat to the health of native wildlife populations and their habitats," the representative said.

Across all of the Great Lakes, goldfish populations are estimated to run into the tens of millions, the BNW posted on Facebook.