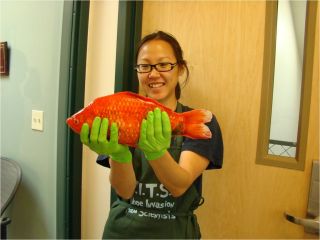 Gigantic goldfish, like this one held by University of Nevada, Reno, researcher Christine Ngai, have been found in the waters of Lake Tahoe.
(Image: © Heather Segale)

A new kind of lake monster has been found, in the depths of Lake Tahoe: gigantic goldfish. Researchers trawling the lake for invasive fish species scooped up a goldfish that was nearly 1.5 feet long and 4.2 pounds.

"During these surveys, we've found a nice corner where there's about 15 other goldfish," environmental scientist Sudeep Chandra of the University of Nevada, Reno, told LiveScience. "It's an indication that they were schooling and spawning." The arrival of the fish, which were probably dumped there by aquarium owners, has Chandra worried — goldfish are an invasive species that could interfere with Lake Tahoe's ecosystem.

It's unclear whether the giant fish were introduced as fully grown adults, or while they were still small, Chandra said. But even a small creature can have a big impact, if there are enough of them.

The goldfish are just one of several species of invasive warm-water fishes in Lake Tahoe. "The invasion is resulting in the consumption of native species," Chandra said. What's more, the invasive fish excrete nutrients that cause algal blooms, which threaten to muddy Tahoe's clear waters. [Photos: Giant Goldfish & Other Freaky Fish]

Fish out of water

Aquarium dumping has become a common practice in the United States and elsewhere, and it's taking a toll on native wildlife. A recent report on California's aquarium trade found that fish owners and importers are introducing hardy, nonnative aquatic species to California waters. "Globally, the aquarium trade has contributed a third of the world's worst aquatic and invasive species," Williams, who was lead author of the report, told OurAmazingPlanet, a sister site of LiveScience, in January.

While the exact number of aquarium owners dumping fish is unknown, scientists know the practice is occurring because these species could not have ended up in these waters naturally. Between 20 percent and 69 percent of fish keepers surveyed in Texas admitted to dumping, according to Williams.

The invaders include tropical fish, seaweed and snails. One of the nastiest is a deadly type of seaweed known as Caulerpa. A type of algae that produces toxic compounds that kill off fish, Caulerpa was eradicated in 2000 (at great expense) from lagoons in Southern California.

Aquarium owners should be more careful when disposing of unwanted fish and other animals, Williams cautioned. "It's pretty simple: Don't dump your fish," she said. Instead, she suggests calling the pet shop that sold the fish or your state department of fish and wildlife. (Euthanasia is another option, but simply flushing fish down the toilet can be problematic — for the fish and for your plumbing.)

So why do people dump fish? Studies of dumping have shown that size and aggressiveness of the fish are two main factors, Williams said.

The largest pet goldfish, according to the BBC, was a fish named Goldie that was 15 inches (38 cm) long and weighed more than 2 pounds (0.9 kg).