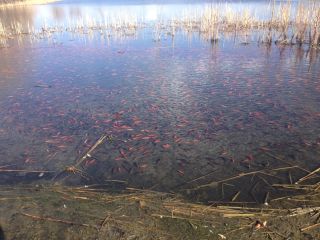 Thousands of goldfish showed up in Teller Lake #5 in Boulder, Colorado, this March.
(Image: © Colorado Parks and Wildlife)

They multiply like … fish! Apparently, a handful of goldfish dumped into a lake in Boulder, Colorado, just three years ago have reproduced and now number in the thousands.

The explosion of these exotic fish, which are not native to anywhere in North America, has biologists worried and trying to figure out options for the animals' removal.

"Based on their size, it looks like they're 3-year-olds, which were probably produced from a small handful of fish that were illegally introduced into the lake," Ben Swigle, a fish biologist at the Colorado Parks and Wildlife (CPW), told Live Science. [See Photos of the Explosion of Goldfish in Teller Lake]

A ranger noticed the 3,000 to 4,000 goldfish a couple of weeks ago in Teller Lake #5 off Arapahoe Road and reported it to CPW.

"If they escape and move downstream, they'll directly compete with our native species, all of which were here before the land was even settled," Swigle said.

There are about three or four fish species considered threatened or "species of concern" living downstream from the lake; they include the stonecat (a miniature version of catfish), the common shiner and the brassy minnow, Swigle said. These fish feed on plankton and small insects, the same diet as goldfish, he added.

"If they [the goldfish] explode and get downstream and potentially explode, there they are competing with these fishes not only for spawning habitat but also for foraging resources," he said.

In addition to supplanting the native species, these koi goldfish may be carrying viruses. Unlike the fish from fisheries that are used to stock lakes, pet goldfish are not rigorously tested for disease, Swigle said. Aquarium fish could carry viral hemorrhagic septicemia virus (VHSV), responsible for killing off thousands of fish in the Great Lakes, and bacterial kidney disease, which has been seen in aquarium fish, Swigle said.

CPW scientists are currently considering three options for dealing with the exotic goldfish explosion. Officials could drain the lake and leave it dormant for a while, use electricity to stun the fish and then net them out, or use a chemical called rotenone that interferes with respiration to "remove" the fish.

If the fish are physically removed, they could be brought to a raptor sanctuary and fed to injured hawks, ospreys and bald eagles, he said.

This isn't the first time such fish have turned up in high numbers in the area. In November 2012, some 2,275 koi goldfish had to be removed from Thunderbird Lake in Boulder, after a few were likely dumped there as "unwanted pets" two to three years earlier, according to a CPW statement.

"Goldfish are not a native species and are very harmful to the local aquatic ecosystem," Kristin Cannon, district wildlife manager for Boulder, said in the CPW statement. "We strongly encourage the public not to dump their unwanted pet fish in our waters. It is bad for our environment as well as illegal."

One way to get rid of unwanted aquarium fish is to call the pet shop that sold the fish and try to return it, said Sue Williams, an evolution and ecology professor at the University of California, Davis Bodega Marine Laboratory, who spoke with Live Science for a past article.

Pet owners wanting to dispose humanely of their aquarium fish may want to consider the guidelines put forth by the American Veterinary Medical Association in its 2013 report for euthanasia of animals. Some acceptable methods, according to the association, include a process that involves immersion with anesthetic solutions or injection with a solution that contains ketamine. The report also describes other methods that are acceptable when certain conditions are met, and additionally lists unacceptable euthanasia methods.

Tempted to flush your fish? That may not be a great idea, either, as the hardy fish can make it to natural waterways and wreak havoc, Williams said in the past article.