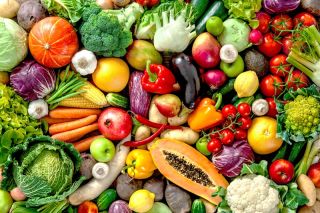 Mothers who eat a high-fiber diet in pregnancy may lower the risk of celiac disease in their children, a new study suggests.

The study researchers analyzed information from more than 88,000 Norwegian children and their mothers, who gave birth between 1999 and 2009. The mothers were asked about their fiber and gluten intake in their 22nd week of pregnancy, and the children were followed for about 11 years for a diagnosis of celiac disease.

The study is one of the first to examine the link between fiber intake during pregnancy and children's risk of celiac disease.

The researchers cautioned that their findings are preliminary. "We cannot yet recommend any specific dietary measures during pregnancy to prevent celiac disease, and this needs to be further studied," study lead author Dr. Ketil Størdal, a research professor at the Norwegian Institute of Public Health and a pediatric gastroenterologist at Østfold Hospital Trust in Norway, said in a statement.

However, the study didn't find a link between the mother's gluten intake and her child's risk of celiac disease. "Our findings do not support gluten restriction for pregnant women," Størdal said.

The study will be presented Friday (June 7) at the annual meeting of the European Society for Paediatric Gastroenterology, Hepatology and Nutrition (ESPGHAN). It has not yet been published in a peer-reviewed journal.

Celiac disease is a condition in which people's immune systems react to gluten — a protein found in wheat, rye and barley — damaging the lining of the small intestine. The condition affects about 1 out of every 100 people in the United States and most European countries. Currently, the only way to manage celiac disease is for patients to avoid foods containing gluten for the rest of their lives.

In the new study, celiac disease was diagnosed in 982 children, or 1.1% of all children in the study.

It's known that fiber affects the bacteria in people's guts (the gut "microbiome"). The researchers hypothesized that a mother's fiber intake may affect her child's gut flora, which in turn could affect the risk of celiac disease. (Indeed, some studies have found that people with celiac disease have an altered gut microbiome compared to those without the condition.)

However, much more research is needed to prove the researchers' hypothesis, and the authors plan to conduct future studies on how a mother's fiber intake affects her child's gut flora, Størdal said.

It's recommended that pregnant women eat about 25 grams (0.9 ounces) of fiber per day, the same recommendation as for the general population, according to the The American College of Obstetricians and Gynecologists.