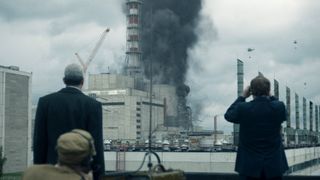 An image from the miniseries shows its depiction of the helicopters dumping sand and boron on the core to stop the release of radioactive materials.
(Image: © HBO)

In the HBO miniseries "Chernobyl," the Soviet nuclear physicist Ulana Khomyuk (a composite character played by Emily Watson) realizes that there's been a massive release of radioactive material somewhere nearby and immediately pops an iodine pill. She then encourages others she encounters to do the same. So, why that pill? How does a simple element like iodine protect against radiation?

The short answer is that it doesn't have any direct anti-radiation effects, but might offer some indirect protection. Iodine doesn't ward off free-flying neutrons or remove radioactive dust from drinking water. It does however change how your body behaves, in ways that can reduce the risk radioactive materials pose. Here's how:

Under normal circumstances, your body is fairly iodine-greedy. Your thyroid needs the chemical, and without iodine, the thyroid can't produce the hormones it usually does. People with severe iodine deficiencies develop enlarged thyroid glands, or goiters. Very young children with iodine deficiencies can even develop intellectual disabilities, according to the American Thyroid Association. In the U.S. and other parts of the world, iodine gets added to table salt to prevent these issues. [5 Weird Things You Didn't Know About Chernobyl]

But iodine, like all basic elements, comes in different "isotopes," or versions of the element. Every isotope of iodine has the same number of protons (53), but the number of neutrons varies. In its natural state, Earth has only one isotope of iodine: iodine-127, which has 53 protons, 74 neutrons and negligible radioactivity. But as uranium atoms shatter in the core of a nuclear reactor, they split into smaller atoms, most notably iodine-131.

The difference between iodine-127 and iodine-131 is small, just four neutrons. But iodine-131 is radioactive, firing off neutrons and rapidly decaying, with a half-life of just eight days, meaning half of it will remain after that time. Your body can't tell the difference between these two isotopes, though, and your thyroid gland will hungrily absorb as much iodine-131 as it does iodine-127. And once absorbed, that iodine will sit in your body, spewing radiation into the surrounding tissue and damaging DNA. Taking a large dose of iodine, in theory, will sate your body's hunger for the substance and prevent you from absorbing the iodine-131 once it arrives.

It's best to act quickly though. Iodine-131 is "highly mobile" in its environment, Kathryn Huff, a nuclear reactor engineer and University of Illinois at Urbana-Champaign professor, told Live Science for a previous article. The substance enters the water, where plants pick it up and pass it on to animals. Once the radioactive iodine has been released, it's very difficult to get rid of until it decays away. [Infographic: Chernobyl Nuclear Disaster 25 Years Later]

People living in the area may have also been unusually susceptible to poisoning via radioactive iodine, the researchers wrote.

"The mild iodine deficiency in the region surrounding Chernobyl could ... have affected the radiation dose," they wrote, "by increasing the amount of iodine accumulated and increasing the size of the gland in which it was deposited, and it might also alter the radiation effect itself."

While it may remain unclear just how many lives iodine pills can save after a nuclear disaster, it's still standard practice in the U.S. to distribute the pills to people living near a nuclear plant. In the event of an emergency, according to handbooks distributed by the U.S. Nuclear Regulatory Commission, safety officials will instruct people in the affected area to take the pills.