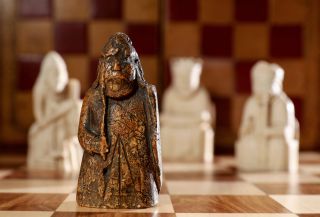 A medieval chess piece that was missing for nearly two centuries was recently found and is going up for auction on July 2nd.
(Image: © Courtesy of Sutheby's)

A medieval chess piece, one of five that have been missing for nearly two centuries, was chilling in a drawer in Edinburgh.

Now, the grumpy-faced, sword-wielding chessman, otherwise known as "Lewis Warder," will be auctioned off for up to 1 million pounds ($1.3 million) at Sotheby's Auction House in London on July 2. [16 of the Most Interesting Ancient Board and Dice Games]

The warder, which translates to a rook in modern-day chess, is part of a famous group of four medieval chess sets discovered in 1831 on the Isle of Lewis in the Outer Hebrides (an archipelago in Scotland), according to a statement from Sotheby's.

The pieces were likely crafted — most of them from walrus ivory — sometime between the 12th and 13th centuries in Trondheim, Norway. The leading theory for their provenance is that they belonged to a trader in chess pieces at the time, before being lost during a shipwreck, according to the statement.

It's unclear how these chess sets were discovered in the 19th century, though some tales point to a wandering, grazing cow that happened upon them; others suggest that a sailor came ashore clutching the bag of artifacts. Whoever found the pieces also found circular game pieces and a belt buckle — all of which became known as the "Lewis hoard."

But while 82 pieces from the hoard are now displayed at the British Museum, and 11 pieces in the National Museum of Scotland, one knight and four warders — needed to complete these chess sets — had been missing since the 19th century. This newly discovered warder was one of the missing pieces, and the first one found from the set since their original discovery.

In 1964, an antiques dealer in Edinburgh bought the missing piece for five pounds, recording the purchase in a ledger as an "antique walrus tusk warrior chessman." The item was then passed down through his family, and sat in a drawer for 55 years, where the antique dealer's daughter would sometimes take it out to admire its uniqueness, according to the statement. The family recently brought the piece to Sotheby's.

These chessmen have inspired many stories and folktales, such as the magical chess pieces in J.K. Rowling’s “Harry Potter and the Sorcerer's Stone,” according to the statement. But with their different dresses and gestures, the pieces have also offered researchers insights into medieval civilizations. [Here's Where J.K. Rowling Got Her Magical Ideas for Harry Potter (Photos)]

"Today, all the chessmen are a pale ivory color, but the new Lewis Warder’s dark tone clearly has the potential to offer valuable and fresh insight into how other Lewis chessmen may have looked in the past," Alexander Kader, the co-worldwide head of Europan Sculpture and Works of Art at Sotheby's, said in the statement. "There is certainly more to the story of this warder still to be told, about his life over the last 188 years since he was separated from his fellow chessmen."