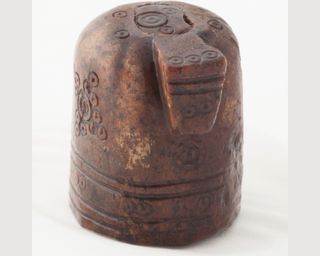 Discovered recently in a 13th-century house in Tønsberg, Norway, this chess piece is a knight.
(Image: © Thomas Wrigglesworth/NIKU)

Chess fans today may not recognize this decorated thimble-shaped object, but a recently discovered 800-year-old game piece from Norway is actually a knight.

Archaeologists discovered the exquisitely-preserved chess piece in a 13th-century house in Tønsberg. The game piece, which is made mostly out of antler, would have been used to play what was called shatranj (called chess today). There is likely some lead inside the piece to help it "stand firmly on the chessboard," a team of archaeologists from the Norwegian Institute for Cultural Heritage Research (NIKU) said in a statement.

Discovered just before Christmas 2017, "the piece is richly decorated with circles on the bottom, several dotted circles on the sides and at the top. The protruding snout on the top has two dotted circles," archaeologists said in the statement. "By looking at the ancient form of chess, shatranj, the piece from Tønsberg appears to be a horse," which is known today as a knight, they said. [The 25 Most Mysterious Archaeological Finds on Earth]

This knight is similar in design to chess pieces seen in Arabia, said Lars Haugesten, the project manager for the excavation.

"The game of chess was taken up in the Arab world after the conquest of Persia in the seventh century, and was introduced to Spain in the 10th century by the Moors. From Spain, the game spread rapidly northwards, and may have been known in Scandinavia shortly afterwards," the archaeological team noted in the statement.

While the knight resembles chess pieces from Arabia, it doesn't mean that it was actually made there. In fact, the archaeologists refer to it as an "Arabic-inspired chess piece."

Though chess pieces with an Arabic design are rare in Scandinavia, this isn't the only example from the region, the archaeologists said. Archaeologists found the oldest chess piece known in Scandinavia in Lund, Sweden. The piece dates to the last half of the 12th century and has a design that is similar to the one found at Tønsberg, Haugesten said.

The 13th-century house where the chess piece was found is in an area of Tønsberg known as Anders Madsens gate. Located near a medieval castle, excavations in this gate area started in autumn 2017 and have revealed several medieval streets and houses. A wide variety of artifacts, including combs, ceramics and antlers, were found during the excavations, the archaeologists said.