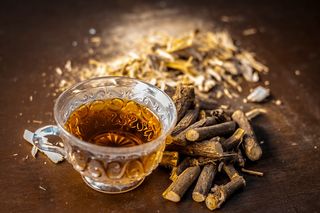 A man in Canada "overdosed" on licorice by drinking too much licorice tea, which caused his blood pressure to soar to dangerous levels, according to a new report of the case.

The 84-year-old man went to the emergency room (ER) after he took his blood pressure at home and noticed very high readings. He was also experiencing headache, sensitivity to light, chest pain and fatigue, along with swelling in his calves, according to the report, published today (May 27) in the Canadian Medical Association Journal.

Doctors at McGill University in Montreal treated the man with several medications to lower his high blood pressure, and his symptoms improved over the next 24 hours.

Later, the man told doctors that he had been drinking one to two glasses of homemade licorice tea a day for the last two weeks. This type of tea is made from the roots of the licorice plant, Glycyrrhiza glabra. It is a popular drink in Egypt, where it is known as "erk sous," the authors wrote in the study.

Consuming too much licorice root or candies flavored with licorice root — including black licorice — is known to be toxic, according to the U.S. Food and Drug Administration (FDA).

That's because licorice root and black licorice contain a compound called glycyrrhizin, which can cause the body's potassium levels to fall. This, in turn, can lead to health effects such as high blood pressure, abnormal heart rhythms and swelling, the FDA says.

The FDA regulates how much glycyrrhizin is allowed in food, but still recommends that people avoid eating large amounts of licorice at any one time. (Of note, many "licorice" or "licorice flavored" products manufactured in the U.S. do not actually contain any licorice, but instead are flavored with anise oil, which has the same smell and taste, according to the FDA.)

In the current case, the man knew about the link between licorice and high blood pressure, but he didn’t think he was consuming too much licorice, the report said.

The case highlights an opportunity for doctors "to educate their patients with hypertension about the potential adverse effects of licorice to prevent licorice-related complications," the authors conclude.