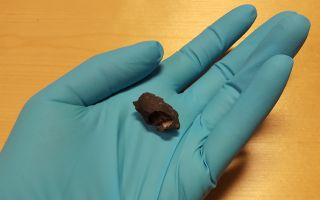 A Stone-Age person who once chewed on this wad of pitch left some of their DNA behind.
(Image: © Natalija Kashuba/Stockholm University)

More than 10,000 years ago, humans who settled in what is now Sweden chewed gobs of sticky pitch, a tar-like material extracted from birch bark. This ancient "gum," recovered from a Mesolithic settlement, still contains traces of DNA — the oldest human DNA from Scandinavia.

The finds are especially valuable because few Mesolithic human bones have been found in Scandinavia; even fewer contain viable DNA.

Scientists found eight chewed-up wads of birch-bark pitch at a site called Huseby Klev, on Sweden's western coast. During the Stone Age, people across Scandinavia used pitch gum as a glue for tools, according to a statement. [Photos: Ancient Human Remains from Beneath the North Sea]

Though Huseby Klev was originally excavated in the 1990s, at the time it was not yet possible to test for ancient human DNA. Decades later, however, the researchers were able to extract DNA from three pieces of pitch. The DNA belonged to three individuals: two females and one male.

When the scientists realized that they could sequence DNA from the chewed lumps that had been spat out 10,000 years ago, "the results overwhelmed us," said lead study author Natalija Kashuba, a doctoral candidate in the Department of Archaeology and Ancient History at Uppsala University in Sweden. Kashuba performed the experiments as a researcher with the Museum of Cultural History (MCH) in Oslo, Norway.

Ancient pitch samples like these often bear imprints of the long-ago chewers' teeth. Though the three pieces that the scientists analyzed did not include tooth marks, The black wads exhibited the consistency of "chewed bubble gum," the scientists reported.

But unlike modern gums, these ancient wads were not artificially sweetened. They probably tasted like resin, a flavor "which is said to be pleasing," according to the U.S. Department of Agriculture.

When the study authors analyzed the DNA, they identified three different genomes from the three pitch samples, and determined that the gum chewers did not share gums and were not related to each other. The scientists also found that the individuals were genetically similar to Mesolithic people from Scandinavia and northern Europe.

Gums made of pitch and other substances that were chewed up thousands of years ago have been found around the world, including in regions where human remains are poorly preserved or unavailable for study, the scientists said. Pitch samples could therefore serve as a possible source of DNA data, even when remains are out of reach, study co-author and MCH researcher Per Persson said in the statement.

"DNA from these ancient chewing gums have an enormous potential not only for tracing the origin and movement of peoples long time ago, but also for providing insights in their social relations, diseases and food," Persson said.

The findings were published online May 15 in the journal Communications Biology.