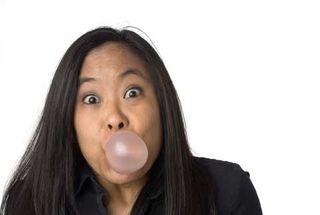 Gum has been around since the time of our Neolithic ancestors.
(Image: © Dreamstime.)

People have enjoyed gum since long before BubbleYum or Big League Chew came around. Our Neolithic ancestors chewed on gum made from birch bark tar.

Other cultures, such as the Ancient Greeks and American Indians, also chewed gum-like substances made from resins and other residues from trees, grasses and other plants.

Paraffin was another popular gum base, though it couldn't be chewed until heated and moistened in the mouth.

Modern chewing gum dates from the 1860s, when a substance called chicle was developed. Chicle was originally imported from Mexico as a rubber substitute and was tapped from a tropical evergreen tree named Manilkara chicle in the same way that latex is tapped from a rubber tree. Chicle gum became more popular than gums made from resins because it was smoother, softer and held its flavor longer.

Now, most gums are made from synthetic bases because they are cheaper and more readily available.