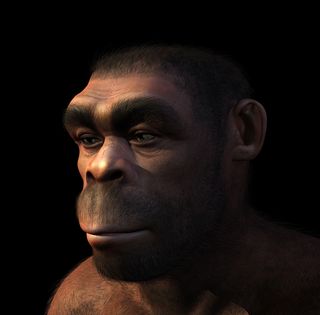 The modern human body evolved over millions of years, and developed to deal with problems that many humans don't face today, such as scarcity of fat, sugar, and safe shelters. As a result, the instincts passed down by human ancestors often conflict with the reality of modern life.
(Image: © Linda Bucklin | Shutterstock)

But amid these cultural transformations, one fundamental aspect of life has remained relatively constant: the blueprint of the human body.

"Like it or not, we evolved to be sweaty, fat bipeds that are furless and big brained," Harvard evolutionary biologist Jason Lieberman said during a public lecture on Nov. 6 here at the American Museum of Natural History. "We evolved to crave sugar, starch and fat. We evolved to be physically active, but we also evolved to be lazy," said Lieberman, who discussed the consequences of living with a Stone Age body in a Space Age world.

During the talk, Lieberman described some of the ways that instincts humans inherited from the Stone Age — also known as the Paleolithic Period, stretching from between 2.6 million to about 10,000 years ago — now conflict with modern life and contribute to increasingly common lifestyle-induced diseases such as Type 2 diabetes and heart disease. Humans crave high-energy foods, like fats and carbohydrates, because such food was hard to come by in the Stone Age, but can now be consumed in great abundance to the detriment of the body. Meanwhile, humans typically opt out of energy-intensive habits, such as walking to destinations, because people also inherited brains hardwired to want to save energy. [10 Things That Make Humans Special]

Here are five day-to-day decisions modern humans face that are made complicated by their Stone Age bodies:

One study that measured the percentage of people in the United States who chose stairs over escalators when both were available side by side found that only 3 percent chose the stairs, Lieberman said.

But a habit that modern people might view as lazy would have been considered smart by humanity's ancestors: Hunting and gathering was energy-intensive, and short breaks of inactivity offered the rare chance to save hard-earned calories.

"If there were escalators in the Kalahari Desert, they would be using them too," Lieberman said during his talk, referring to human ancestors. "And it makes sense that they would."

Humans evolved to be a walking species. Whereas chimps walk an average of about 2 to 3 kilometers per day (1.2 to 1.9 miles) — spending most of their time foraging and chomping on vegetation — hunter-gatherers are thought to have walked 9 or more kilometers (5.6 miles) every day, Lieberman said. [How Many Calories Am I Burning (Infographic)]

"We evolved to walk, run, climb, dig and throw," Lieberman said. "That's how hunter-gatherers got their dinner every day."

Walking keeps humans healthy by stimulating blood flow and flushing oxygen through the body. But today, modern civilization thrives largely on long-term sitting, to the detriment of physical and mental health.

People do have the option to exercise, and take time out of the day to work those muscles that were built to be used. But this conscious decision to burn excess energy is not a decision the human body evolved to need to make.

Humans lived thousands of years walking barefoot and developing calluses that would protect their feet from twigs and stones, before eventually inventing protective soles that are now called shoes.

This protection came with a price: flat-footedness. Flat feet have become a common phenomenon in modern society, and can lead to knee problems and other complications with age. Based on skeletal remains, researchers believe flat-footedness was far less common during the Paleolithic Period, when barefoot walking allowed protective tissues to build up around arches, Lieberman said.

Nobody would argue that reading is bad for human health. But Lieberman pointed out that myopia — also known as nearsightedness, when far-away objects look blurry — has increased substantially with the advent of writing and reading. This is because the eye muscles, which are not made for prolonged up-close vision, must strain to look at things close to the face, and eventually they stretch and elongate to the point that they no longer function properly.

Increasingly longer hours spent inside office buildings and homes, rather than visually stimulating landscapes like forests and other natural spaces, can also lead to sight problems, Lieberman said. But humans take this risk, and manage to get by fine with glasses.

Some estimates suggest the Paleolithic diet consisted of 4 to 8 lbs of sugar per year. Today, the average American consumes more than 100 lbs (45 kilograms) of sugar per year, Lieberman said. This drastic increase had been partially implicated in the rise of heart disease and diabetes as leading causes of death in the country over the past several decades. [Infographic: Excessive Added Sugar Clogs Americans' Diets]

But cavemen weren't watching their calories; they just didn't have access to the huge quantities of sugar available today. Modern technology allows humans to extract sugar from a wide range of sources — including sugar cane, maple trees, beehives and corn stalks — and ship that sugar around the world in huge quantities and at unprecedented speeds.

If given the chance to gorge on candy bars, Paleolithic children probably would have wanted to just as much as modern children do, Lieberman said. But they just didn't have that option.

"That kid had no option but to eat healthy food and to exercise, because that is what she did every day," Lieberman said. "Now we have to teach our children to make choices for which we are not really prepared for from an evolutionary perspective."

In concluding, Lieberman described how cultural change could help humanity make the most of its Stone Age bodies in the modern world. With increasing scientific evidence that inactivity and sugar- and fat-rich diets lead to health problems, people can use the big brains they inherited to make smart lifestyle decisions and overcome the instincts humans inherited from a much different time on Earth.