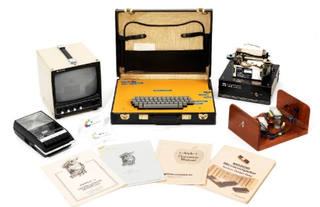 This Apple-1 will come with a monitor and keyboard, as well as original user manuals.
(Image: © Christie's)

Interested in spending your life savings on a nearly useless desktop computer with 4KB of memory and a 1 MHz processor? You're in luck: Christie's, a London auction house, said it will auction off a rare Apple-1 computer between May 16 and May 24.

Back in 1976, desktop computers weren't common, and most of their modern uses didn't exist. But even then, the Apple-1 had some competitors, such as the Altair 8800. To the extent the Apple-1 stood out from the pack, it was for the relative simplicity of its design and assembly. Though it sold without a screen, keyboard, power supply or even a casing, its motherboard was preassembled. That made the Apple-1 a relatively simple project compared with some of the other kits available at the time, where the motherboard itself required significant assembly. [19 Greatest Modern Thinkers]

If you want to see what it's like to use an Apple-1 without dropping 600K for the pleasure, you can use a free emulator to simulate the experience in your browser.