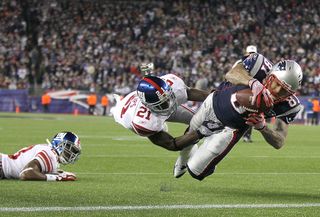 Chronic traumatic encephalopathy (CTE) — the degenerative brain disease thought to be linked to repeated head trauma — can currently be diagnosed only after death, via autopsy of the brain.

But in a new study, researchers have identified a possible biomarker, found in the cerebrospinal fluid, that could allow doctors to diagnose CTE when a person is still alive.

The biomarker is a protein called tau, according to the study, published today (May 8) in the journal Neurology. Previous research has linked tau to CTE, and in the new study, researchers found elevated levels of the protein in the cerebrospinal fluid of more than half of the study participants, who were former professional athletes who experienced multiple concussions. (Multiple concussions are linked to an risk of CTE, but because the condition cannot be diagnosed when a person is alive, it's unknown whether the athletes had CTE.)

"We are optimistic that we are getting closer to finding a biomarker for CTE, which will allow researchers to study how [tau] affects brain function," said senior study author Dr. Carmela Tartaglia, an associate professor at the Tanz Centre for Research in Neurodegenerative Diseases at the University of Toronto. [5 Facts About Chronic Traumatic Encephalopathy]

People with CTE are more likely to develop dementia, personality disorders or behavioral problems, though it's not entirely clear how CTE affects the brain.

The new study included 22 Canadian men, all former professional athletes, with an average age of 56. All of them had experienced multiple concussions. Also included in the study were non-athletes: 12 people with Alzheimer's disease and five healthy people, serving as controls.

What's more, the athletes with elevated tau levels scored lower on executive functioning tests — which assess attention, memory, and organizational and planning skills — than athletes with normal levels of tau. Individuals with elevated tau had average test scores of 46, compared to 62 for those with normal tau levels, and those lower scores may indicate CTE, the study said.

"We did observe that study participants with elevated tau performed worse on executive function tests than those with normal levels," Tartaglia told Live Science. "Repeated concussions definitely put the brain at risk."

In addition, brain scans revealed that the individuals with elevated tau levels showed differences in the white matter of the brain, Tartaglia added. These changes are also seen during autopsies in people with CTE.

However, not all athletes who had experienced multiple concussions had elevated tau levels. Tartaglia said that additional studies are needed to find out why this is so. "It can be due to genetic or environmental factors, but more research is definitely needed to determine what makes some individuals more vulnerable," she said.

Dr. Jamie Sue Ullman, director of neurotrauma at North Shore University Hospital in Manhasset, New York, said she agrees with Tartaglia that the discovery of a possible CTE biomarker is promising. However, she emphasized that additional studies need to be conducted, particularly studies with more participants.

Limitations of the new study included the small sample size and lack of women among the participants.

"Most of the studies on CTE biomarkers have consisted of a small number of participants, so it is difficult to draw conclusions," Ullman told Live Science. "Future studies also need to include a broader spectrum of athletes who did not experience concussion, as well as those who participated in sports where concussion was not likely."