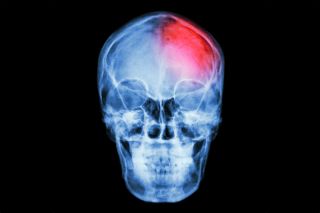 A concussion is a traumatic brain injury caused by the brain violently bouncing or twisting inside of the skull.
(Image: © Puwadol Jaturawutthichai | Shutterstock)

A concussion is a traumatic brain injury (TBI) caused by the brain violently bouncing or twisting inside of the skull. These types of injuries can be caused by hits to the head or a sudden whipping back and forth of the neck or body.

Concussions are a common injury. There are about 1.4 million TBI-related deaths, hospitalizations and emergency department visits each year, and 75 to 90 percent of them are concussions or other forms of mild traumatic brain injury (MTBI), according to the Centers for Disease Control and Prevention (CDC).

There are several factors that may increase the risk of a concussion, according to the Mayo Clinic:

Symptoms may be apparent immediately or they may be delayed by hours or days after injury. Some symptoms that may take time to appear, according to the Mayo Clinic, are irritability or other personality changes, problems with concentration and memory, sensitivity to light and noise, problems sleeping, depression and sensory problems such as the inability to taste or smell.

Symptoms in children can be different than in adults and even harder to diagnose since it is difficult for young children to express how they feel. Parents and caretakers should look for strange behavior like listlessness, appearing dazed, easily becoming tired, crankiness, unusual clumsiness or unsteady walking, excessive crying or changes in eating or sleeping.

Contrary to popular belief, most concussions do not cause a person to pass out. Many do not seek medical help because of this.

And according to past research, symptoms can linger for up to a month in some children who have experienced a concussion. A simple test performed by a doctor on a child who has incurred a concussion in the prior 48 hours can reliably predict whether that child is likely to experience ongoing symptoms a month later. The test, described in the March 8, 2016, issue of the Journal of the American Medical Association (JAMA), was more successful at predicting so-called persistent postconcussion symptoms (PPCS) than the current standard — a doctor's judgment.

Symptoms of PPCS include headaches, dizziness, trouble concentrating and emotional issues, such as irritability. The researchers identified nine criteria that doctors could use to calculate the risk the child would develop PPCS: gender (being female), age (13 or older), a history of migraines, prior lasting concussion symptoms, headache, sensitivity to noise, fatigue, and slowness of answering questions.

In the United States, 1.6 to 3.8 million sports and recreation-related TBIs occur each year, according to the CDC. A TBI kills brain cells and creates chemical changes in the brain.

Dr. Kory Gill, an assistant professor at the Texas A&M Health Science Center College of Medicine and team physician for Texas A&M University Athletics, told Live Science that the most important thing people should know about concussions is that they are not like other sports injuries where it is okay to "play hurt" or "play through the pain."

“Playing when you have not completely recovered from a concussion is dangerous and could be deadly," said Gill. "Become familiar with the signs/symptoms of concussions and if you think you or a teammate has a concussion speak up. It’s actually a law (Zackery Lystedt Law) now that players, coaches, staff and parents be educated on concussions pre-participation."

Zackery Lystedt was a 13-year-old football player in the Seattle, Washington, area who was permanently disabled after sustaining a concussion in 2006. He was prematurely returned to the game, according to the CDC. After the game, Lystedt collapsed on the field. He underwent emergency surgery to remove the left and right sides of his skull to relieve the pressure from his swelling brain. He experienced numerous strokes, seven days on a ventilator and three months in a coma.

After he awoke, Lystedt spent four weeks in a nursing home and two months in a children’s hospital for rehabilitation. It was nine months before he spoke his first word, 13 months before he moved a leg or an arm, and 20 months on a feeding tube, according to the CDC. It would be nearly three years before he would stand, with assistance, on his own two feet. The Washington legislature passed the Lystedt Law in 2009, and other states have passed similar laws to help protect young athletes.

Older athletes need protection too. A recent study found that professional football players who have lost consciousness due to a concussion may have an increased risk of changes in the brain and decline in their memory later in life.

CT scans and blood tests can be used to diagnose concussions. Rest is usually the most common treatment for concussions. The brain shouldn’t be idle for too long, though. “While a short period of rest is important to allow the brain some time to heal, extended rest and sensory reduction (no TV or electronics) actually prolongs symptoms rather than helping,” said Dr. Kenneth Podell, a neuropsychologist at Houston Methodist Hospital. When in doubt, consult with a medical professional.

A single concussion usually recovers well and the person affected usually isn’t bothered with long-term problems. Rarely, if a second concussion occurs before the brain has healed from the first concussion, it can lead to rapid and severe brain swelling and even death. This condition is also called the second impact syndrome and occurs in people under the age of 21.

"It’s critical to protect children from head injuries because their brains are still developing and the tissue isn’t fully formed," Dr. Joseph Rempson, co-director of the Center for Concussion Care and Physical Rehabilitation at Overlook Medical Center's Neuroscience Institute in Summit, New Jersey, told Live Science. "According to research, the brain continues to evolve until an individual is 20 to 25 years old. If a child injures his or her brain, they may not reach their full developmental potential from a memory or cognitive standpoint.”

Dr. Vani Rao, a neuropsychiatrist and co-author of "The Traumatized Brain: A Family Guide to Understanding Mood, Memory, and Behavior After Brain Injury" (Johns Hopkins Press, 2015), noted that the majority of people who sustain a single concussion recover without any long-lasting consequences. However, multiple concussions can increase risk for developing chronic neuropsychiatric problems such as depression, aggression and cognitive problems.