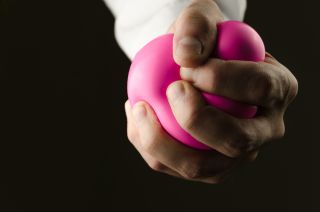 The fast-paced world we live in is a perfect driver of stress. The racing heart, knots in the stomach and vague sense of agitation are an unavoidable part of the human condition. But chronic stress can, over time, harm the body, causing everything from inflammation to cardiometabolic disease.

In some cases, stress may play a role in cancer. But just how tightly are these two conditions linked?

Studies suggest several ways that stress may influence cancer development, said Shelley Tworoger, an associate professor of population science at the Moffitt Cancer Center in Tampa, Florida. Tworoger spoke about these links during a talk earlier this month at the annual American Association for Cancer Research meeting in Atlanta. [7 Cancers You Can Ward Off With Exercise]

In those who already have certain types of cancer, stress can accelerate progression and worsen outcomes, increasing evidence suggests. But "there's more question" about whether or not chronic stress can cause cancer in the first place, Tworoger told Live Science.

Indeed, according to the National Cancer Institute, the evidence that stress can cause cancer is weak. Even so, "there's a lot of biologic reasons to think that an association could exist," Tworoger said. Here's what we know about chronic stress and the risk of cancer.

Stress and the body

Acute stress is completely normal and helps us react to dangerous situations. For instance, if a "lion is chasing you or you're almost in a car accident," the body's stress response makes your heart race, sharpens your vision and can thus help you survive, she said.

During a stressful situation, the body turns on two key pathways: the sympathetic nervous system, which triggers the fight or flight response, and the hypothalamic pituitary adrenal (HPA) axis, which releases a key stress hormone called cortisol.

In the short term, these two axes "turn on, help you get through whatever the situation was and then, usually when the stress abates, they turn back off again," Tworoger said.

But chronic stress and distress (extreme anxiety, sorrow or pain) continuously activate these pathways and release stress hormones, "in a way your body wasn't really designed for," Tworoger said.

Past research has shown that chronic activation of both of these pathways can lead to changes in the body — including altered metabolism, increased levels of certain hormones and the shortening of telomeres, the caps at the ends of DNA that prevent damage. All of these changes could potentially influence the development and progression of cancer, she said during the talk.

The long-term release of stress hormones can also induce DNA damage and affect DNA repair, said Melanie Flint, a senior lecturer in immunopharmacology at the University of Brighton in the United Kingdom, who also spoke during the talk.

What's more, chronic stress weakens the immune system. Since the immune system acts as the cleaning crew that destroys and mops up damaged cells with genetic or metabolic errors, a weakened immune system could be the doorway in for cancer cells, Toworoger said.

There is "growing evidence that chronic stress can affect the cancer risk and progression through immune dysregulation," said Dr. Elisa Bandera, a professor and chief of Cancer Epidemiology and Health Outcomes at the Rutgers Cancer Institute in New Jersey, who wasn't a part of the talk. But "I don't think you can say that there is an established link."

In fact, most evidence ties stress to cancer survival, not to the risk of getting cancer in the first place, she said.

It's tricky to design a study to show that stress fuels cancer in part because the experience of stress is so subjective and hard to measure. Stress can also manifest itself in the body in very different ways depending on how an individual perceives and copes with it, Toworoger said

"Some people have a negative response to job stress and some people love being stressed out in their jobs," Tworoger said. In fact, "they thrive on it." This perception, in turn, affects how the body responds.

As a result, many human studies rely on associations — rather than cause and effect— to show a link between stress levels and cancer incidence.

Previous studies have suggested, for example, that chronic stress is associated with an increased risk of a number of cancers, including breast cancer and some gastrointestinal cancers.

Will we ever know?

Many other studies have also found no association. For example, Tworoger and her team did not find an association with job strain and ovarian cancer risk in a 2017 study published in the journal Psychosomatic Medicine. What's more, a study published in 2018 in the European Journal of Cancer categorized the link between stress and cancer as a "myth."

Some experts think that it's not the stress itself that's causing the cancer, but the unhealthy behaviors that come with being stressed.

Indeed, "the general consensus seems to be that chronic stress does not cause cancer per se, but it can indirectly increase cancer risk," through stress-related behaviors such as smoking or heavy drinking, said Firdaus Dhabhar, a professor in the department of psychiatry and behavioral sciences at the University of Miami, who was not a part of the talk.

Other unhealthy, stress-induced behaviors, such as eating a bad diet and not exercising, also increase the risk of certain cancers, according to the National Cancer Institute. Tworoger, however, thinks that skeptics are writing off the cancer-causing effects of stress too fast. Stress hormones can cause "other biologic effects that are involved in the development of cancer," Tworoger said. So "I think we do need more studies before we can say if [the link between chronic stress and risk of cancer] is a myth."

Either way, there's "more and more evidence" that decreasing stress can improve survival and quality of life for patients who already have or had cancer, Tworoger said. "This has generated interest in mindfulness [and] yoga interventions for cancer survivors with promising results," Bandera added.

And reducing stress and leading a healthy lifestyle is important for many reasons Tworoger said. We "don't know that stress causes cancer, but we do generally know that identifying strategies to help cope with stress can be very positive," Tworoger said.