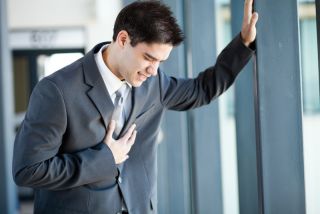 Stress and depression can take a dangerous toll on the health of people with heart problems, a new study finds.

For people who already have heart problems, the combination of stress and severe depression creates a "psychosocial perfect storm," the researchers said in their study, published online today (March 10) in the journal Circulation: Cardiovascular Quality and Outcomes.

The study included nearly 5,000 people with coronary heart disease who were 45 years or older. The participants shared their symptoms of depression and stress during in-home examinations and on questionnaires that were conducted from 2003 through 2007. For example, the participants answered questions on how often they had felt lonely or had crying spells during the past week, and how often they felt unable to control important things in their lives or felt overwhelmed during the past month.

The researchers noted that the "high vulnerability period,"during which people with intense stress and depression were at increased risk of dying or having a heart attack lasted about two and a half years, but after that, the increase in risk disappeared.

They also found that people who had only high stress, or had only high depressive symptoms, but not both depression and stress at the same time, did not have an increased risk of death or heart attack.