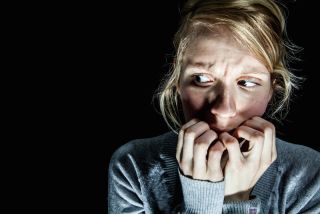 'Tis the season of ghosts, goblins and other things that go bump in the night. And while most Halloween terrors are totally harmless (think jack-o'-lanterns and pointed hats), the frightful holiday might make you wonder: Is it really possible to be scared to death?

There's no question about it, the answer is yes, said Dr. Robert Glatter, an emergency physician at Lenox Hill Hospital in New York.

When people feel an overwhelming fear, their fight-or-flight response jumps into action. This response likely benefited early humans when they faced a menacing beast or aggressor, giving them the necessary adrenaline to either fight the attacker or flee the scene, Glatter said. [7 Weirdest Medical Conditions]

The rush of adrenaline is an involuntary response controlled by the autonomic nervous system. When faced with a fight-or-flight scenario, a person will experience rapid heart rate, dilated pupils and increased blood flow to the muscles, Glatter said.

When adrenaline is released, it triggers calcium channels in the heart to open. "Calcium rushes into the heart cells, which causes the heart muscle to contract strongly," Glatter said. "Basically, in a massive response, the calcium keeps on pouring in, and the heart muscles can't relax."

If a person is scared and has a large amount of adrenaline reaching his or her heart, the individual can develop an arrhythmia called ventricular fibrillation — an uncoordinated contraction of the heart that makes it quiver, not beat regularly as it should, Glatter said.

"It ultimately leads to a drop in blood pressure, because without blood for the brain, you lose consciousness," Glatter said.

A terrifying event, be it a gun held to someone's head or a chilling Halloween trick, can trigger this disorganized heart movement, turning a scary situation into a deadly one, he said. [10 Ghost Stories That Will Haunt You for Life]

"It can happen even in normal [healthy] people," Glatter said. "It doesn't have to be a person with pre-existing heart disease, although those people would certainly be at higher risk."

Fear isn't the only trigger: Any type of extreme emotion can trigger the reaction. High levels of adrenaline can lead to death during sexual intercourse, religious fervor or sporting events, Glatter said. The fight-or-flight response can also be triggered by loud sounds, such as sonic booms, or horrible smells, including entering the house of a compulsive hoarder.

"We had a guy who came into the ER with chest pain after he opened his neighbor's door," Glatter said. "No one thought it was serious, but he was actually having a heart attack. And he was a young guy with no previous medical history."

What's more, "scaremongers" can be held legally accountable if they scare people to death. In May, an insurance company agreed to pay $300,000 to settle a lawsuit concerning an 85-year-old man who died after his vehicle hit a tractor-trailer in Detroit, according to the Associated Press. The man's family alleged that the tractor-trailer didn't have visible backlights, and that the man was literally "scared to death" when he suddenly saw the large vehicle during a rainstorm in 2008, the AP reported.

The man hit the tractor-trailer moments later, possibly because of his heart condition, the AP said.

"The next time you want to scare someone, be careful because you might be held responsible for it," Glatter said.

But there is good news. While the fight-or-flight response is involuntary, people can try to temper their reactions to scary events by practicing yoga, meditation or mindfulness, Glatter said.