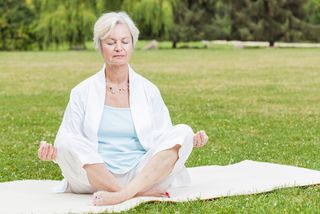 The study involved about 50 adults in Los Angeles ages 55 and older who had trouble sleeping, including difficulty falling asleep or staying asleep, or who felt sleepy during the day. Participants were randomly assigned to complete either a mindfulness meditation program — in which people learn to better pay attention to what they are feeling physically and mentally from moment to moment — or a sleep education program that taught the participants how to develop better sleep habits.

The participants also completed a questionnaire to assess how well they were sleeping, and were given a score from 0 to 21, with higher scores indicating worse sleep.

That level of improvement in sleep scores means that meditation works as well as other sleep treatments, including sleep drugs, according to past studies of these treatments, the researchers said. [Mind Games: 7 Reasons You Should Meditate]

Compared with the people in the sleep education group, people in the meditation group also saw greater improvements in their symptoms of insomnia, fatigue and depression.

The findings suggest that "mindfulness meditation may be introduced to older adults as a short-term solution to remediate their moderate sleep disturbances," the researchers, from the University of Southern California, wrote in the Feb. 16 issue of the journal JAMA Internal Medicine. However, more work is needed to assess how effective the mindfulness program is in improving sleep over the long term, they noted.

Previous studies had found that other forms of mind-body exercise, such as tai chi, have been linked with improved sleep in older adults. But tai chi requires movement, and the new study is one of the first to examine how a type of meditation that does not require movement affects sleep, the researchers said. Such a treatment might be particularly useful for older adults with mobility limitations, Adam Spira, a researcher at Johns Hopkins Bloomberg School of Public Health who was not involved in the research, wrote in an editorial accompanying the study.

What's more, mindfulness programs are generally accessible within communities and are offered at a low cost, the researchers said. Although some types of psychotherapy have been shown to improve sleep in people with insomnia, such therapies are not as readily available to the general public because they require trained health care professionals to administer them, the researchers said.

Treatment with sleep drugs is also common, but these drugs can have side effects, including daytime sleepiness and a risk of developing drug dependency. In the study, there were no harmful events tied to participating in the meditation group or the sleep education program, the researchers said.

More studies are now needed to replicate the findings, and to see if mindfulness meditation is also useful for older adults who have an official diagnosis of insomnia, the researchers said.