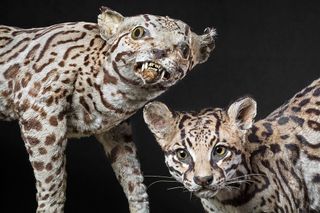 One of these ocelots was prepared by an artist who knew what an ocelot looked like. The other was not.
(Image: © Museum of Natural History, Berlin)

A pair of massive male moose stand locked together in deadly combat. Nearby, a group of buffalo graze on a prairie, a jaguar peers into a valley from a rocky peak, and a trio of mountain goats perch precariously on a steep mountainside.

These scenes may sound dynamic, but the animals are frozen in time, taxidermy specimens in dioramas at the American Museum of Natural History in New York City. These once-living animals are still remarkably lifelike, posed behind glass in scenes representing their natural habitats.

Taxidermy is a type of preservation that applies an animal's tanned skin to a sculpted model, typically posed to demonstrate the creature's habits or behavior. For centuries, artists have preserved animals via taxidermy — occasionally with laughable results — for natural history museums and private collections. But, how do taxidermists do it? And which animals are the most difficult to preserve? [In Photos: Animal Taxidermies Are Uncannily Lifelike]

Before specimens are prepared for museums, artists rigorously observe and draw the living animal so that the posed model will be anatomically correct and realistic, said Stephen Quinn, an artist and a diorama specialist at AMNH until his retirement in 2013.

"The great challenge is arriving at a pose that depicts the behavior and character of the animal, and yet is sculptural and pleasing to the eye," Quinn told Live Science

Prior to the skin's removal, taxidermists may create plaster casts to capture facial details, which are lost once the skin is removed. Multiple casts are made of the skinned body to record muscle groups, which will be recreated later in the sculpted model, Quinn said.

Measurements of the bones — and sometimes the bones themselves — are used to construct a framework known as an armature, "which duplicates the shape and form of the skeleton," he said. Layers of sculpted clay recreate muscles that are flexed or relaxed, depending on the pose.

"And then once that final clay sculpture is finished, a mold is made of that, and a lightweight manikin is cast from that mold," Quinn said.

For commercial taxidermy, the animal's body may instead be sculpted from urethane foam, Divya Anantharaman, a taxidermy instructor and the owner of Gotham Taxidermy in New York City, told Live Science. The skin is then cleaned and preserved through a chemical process and applied to the form.

When scientific accuracy is emphasized, the taxidermic model retains details that are unique to that particular specimen, Quinn said.

But even for experienced taxidermists, some animals can be especially tricky to preserve. Rabbits, for instance, have very thin skin that tears easily, making it hard to manipulate and tan, Quinn said. Mourning dove skin is also impossibly delicate, resembling "a wet Kleenex with feathers on it," according to Anantharaman.

"You breathe on them, and they start to lose feathers," she said.

Snakes are more challenging than you might expect; their musculature is complex, aligning their scale patterns is time-consuming, and because their skin loses color when tanned, they need to be repainted — one scale at a time, Anantharaman explained.

Large mammals, such as elephants, antelopes and giraffes, offer extreme engineering challenges, due to their size. Meanwhile, very small animals test a taxidermist's ability to sculpt on a miniature scale, "like modeling an eyelid that's the size of a hair," she added.

But ultimately, the animals that are the most difficult to mount are those that are the least familiar to the taxidermist, Quinn said. This particular challenge is what led to one of the most infamous taxidermies of all time, dating to the 18th century. [7 Iconic Animals Humans Are Driving to Extinction]

King of the beasts?

Sweden's King Frederick I received a lion as a gift in 1731, and a few years after the lion died, a taxidermist was commissioned to create a mount of the beast, Atlas Obscura reported.

However, the artist only had the lion's skin and bones to work with — and had never seen a living lion. The cartoonish result likely stemmed from the taxidermist having used highly stylized paintings as a reference for what a lion was supposed to look like, Anantharaman said.

A similar example resides in the collection of the Museum of Natural History in Berlin, Germany; an ocelot, preserved in 1818, was also prepared by an artist that had never seen the living animal. In the museum's recent exhibit "Masterpieces of Taxidermy," this woeful-looking creature is displayed alongside a taxidermied ocelot that was mounted in 1934, to highlight the importance of anatomical knowledge for creating models that are truly lifelike.

Typical mistakes include "not using reference photos, not properly preparing specimens, skinning holes into the skin — basically experimenting on your own and not knowing the proper techniques," Maykut said.

"A lot of people underestimate how much work goes into each step," Anantharaman said. "Preserving a hide, tanning a hide, sculpting a form; it sounds simple but it all takes so long. It's definitely not for someone without patience."