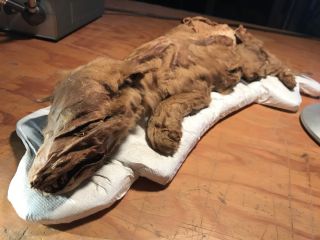 The mummified wolf pup is so well preserved, it still has its head, tail, paws, skin and hair intact.
(Image: © Government of Yukon)

While searching for gold in western Canada's Yukon Territory, miners found another type of rare treasure: the mummies of an ice-age caribou and wolf pup.

Frozen in the ground for more than 50,000 years, the creatures were unveiled last week at the cultural center of the Tr'ondëk Hwëch'in First Nation in Dawson City.

"We're so used to just working with bone, so to have animals with flesh and skin and hair, it really brings the ancient world to life," Grant Zazula, paleontologist for the government of Yukon, told Live Science.

The Yukon is covered with spruce-tree forests today, but during the ice age, the region was a dry and dusty tundra. A diversity of large mammals roamed the icy grasslands, including saber-toothed cats, woolly mammoths and short-faced bears. [Skin and Bones: Inside Baby Mammoths]

There are several gold-mining operations near Dawson City, and it's common for miners to find the fossilized bones of long-dead animals when they're digging through permanently frozen layers of mud.

In June 2016, a gold miner started uncovering the caribou and reported it to paleontologists. The scientists came to the site and recovered the mummified torso, head and two front limbs. A month later, the astonishingly well-preserved wolf pup was found at another nearby mine. Both animals have their skin, muscle and hair intact.

"The wolf pup looks exactly like a taxidermied little puppy," Zazula said. "It's got a little tail, hair, paws, eyelids and lips. It's spectacular." [See Photos of a Perfectly Preserved Ice-Age Foal]

Pieces of the skin were snipped off each animal and sent for radiocarbon testing to reveal their age. Both proved to be at least 50,000 years old, the limit for radiocarbon analysis. However, the caribou was found near a layer of ash from an 80,000-year-old volcanic eruption, a better clue to its actual age.

"That makes it probably some of the oldest mammal tissue in the world," Zazula said.

Zazula said further research on the animals is underway. The creatures'diets could be reconstructed based on analyses of elements like carbon and nitrogen preserved in the hair and bone. Ancient DNA could reveal how the ice-age animals are related to modern herds of caribou and gray wolves in Canada.

Though both the wolf and the caribou survived into the modern world, they were not very plentiful during the ice age. "Their bones are actually quite rare compared to the other large [ice-age]animals," Zazulasaid.

And for theTr'ondëk Hwëch'inpeople, the wolf and the caribou have an interconnected importance.

"The caribou has fed and clothed our people for thousands of years," Tr'ondëk Hwëch'in Chief Roberta Joseph said in a statement. "The wolf maintains balance within the natural world, keeping the caribou healthy. These were an amazing find, and it's a great opportunity to work collaboratively with the Government of Yukon and our community partners."