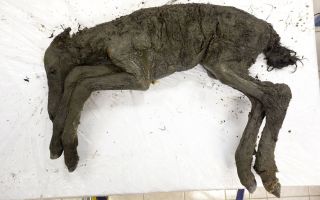 Frozen in ice for millennia, this Siberian mummy is the best-preserved ancient horse ever found.
(Image: © Michil Yakovlev/SVFU/The Siberian Times)

Inside the Batagaika crater in Yakutia, scientists made a remarkable discovery: permafrost melt revealed a perfectly-preserved foal mummy.

The two-month-old foal even had perfectly preserved hair. There was no damage to the specimen at all.

The young horse was a Lenskaya, or Lena Horse that lived in the area between 30,000 and 40,000 years ago, according to Semyon Grigoryev, head of the Yakutia Mammoth museum.

Researchers took detailed information on the foal found in the melted permafrost in Yakutia. The specimen measured 39 inches (98 centimeters) high at the shoulder.

Scientists took hair and biological fluid samples from the foal and liquids and covering soil from the site.

Grigoryev also shared that experts plan to study the contents of the foal's bowel to understand the diet.

The team has a theory as to what happened to the horse. According to Grigory Savvinov, Deputy Head of the North-Eastern Federal University, experts involved in the expedition hypothesize the foal fell into a natural trap and drowned.

The team responsible for recovering the specimen found that the approximately two-month-old foal died between 30,000 and 40,000 years ago.

In Yakutia, Russia the Batagaika crater has offered up a unique specimen of life from long ago.

Inside the Batagai depression, an international Russian-Japanese team worked for a week in August. The foal was discovered two days into the expedition.

Researchers on the team cautiously examine and gather samples from the tiny horse carcass.