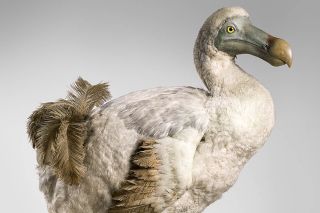 A polar bear that was born in 2006 at Berlin’s Zoological Garden was hand-reared, captivating an international audience. Named Knut, the bear drowned when he was only five years old, likely as a result of contracting encephalitis. Taxidermists with the Natural History Museum in Berlin preserved Knut, and he is currently featured in the exhibit "Masterpieces of Taxidermy." [Read more about animal taxidermy]

German taxidermists developed a new technique to preserve a gorilla at the Berlin Zoo named Bobby, who died at age 9 in 1935. They treated sparsely-furred parts of the hide with paraffin wax, which made the skin more pliable and kept it from drying out, so the artists could retain fine details in Bobby's face and hands.

A snowshoe hare huddles behind a sheltering bush, as a Canada lynx stealthily approaches, in a wintry scene from Quebec, Canada. This diorama, located in the Hall of North American Mammals at the American Museum of Natural History (AMNH) in New York City, demonstrates how taxidermy can display animal behavior.

Alaska brown bears in this diorama are posed against a backdrop representing Canoe Bay, Alaska Peninsula. AMNH taxidermist Robert H. Rockwell sculpted the clay model for the bears in 1940, and artist Belmore Brown painted the diorama backdrop in 1941.

A pair of wolves are suspended mid-step in this AMNH diorama, as they lope over snow in a Michigan forest at night, the Northern Lights shimmering behind them. Taxidermy artists carefully study animal anatomy, to model forms that will accurately reflect an animal's musculature and how it moves.

Small animals can be challenging to taxidermy, requiring a lot of patience and attention to detail to reproduce their tiny muscles and other structures. Cutting corners on research and rushing preparation are common errors made by beginning taxidermists, artist Amber Maykut, owner of Brooklyn Taxidermy, told Live Science.

Taxidermist Divya Anantharaman specializes in birds and small mammals. Some types of bird skins need an especially delicate touch, as too much handling can cause the feathers to fall out.

An ocelot, preserved in 1818, was prepared by an artist that had never seen the living animal. The Natural History Museum in Berlin displayed it alongside an ocelot mounted in 1934, to highlight the importance of anatomical knowledge for creating lifelike taxidermy specimens.