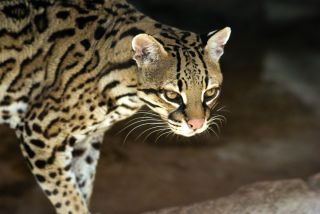 Ocelots are small, American wild cats about twice the size of housecats. Their coats have distinctive markings in a wide variety of patterns. Each ocelot's pattern is unique, with dark spots on an orange, tan and white coat.

The word "ocelot" comes from the Aztec word "tlalocelot," which means field tiger, according to the San Diego Zoo. Ocelots are also sometimes called painted leopards — because of their markings — and dwarf leopards — because of their markings and their size. However, ocelots are only distantly related to true leopards or tigers. Leopards and tigers are members of the Pantherinae (roaring cats) subfamily, and ocelots are in the Felinae (small cats) subfamily.

Like housecats, ocelots have narrow jawline, long tails and limber bodies. While larger than housecats, ocelots only come up to an adult male human's knee. Ocelots grow to around 29 to 39 inches (73 to 100 centimeters) — females are slightly smaller. Males weigh 15 to 34 lbs. (7 to 15.5 kg) and females weigh 14.5 to 25 lbs. (6.6 to 11.3 kg), according to the San Diego Zoo. Ocelots are the second largest spotted cats in South America, after jaguars.

Ocelots are found in United States, Mexico, Central America and South America in every country except Chile. In the United States, these cats have been found in Arizona and Texas.

They have adapted to many different environments, including thorn scrubs, coastal marshes, mangrove forests, savanna grasslands and tropical and subtropical forests, according to the International Union for Conservation of Nature (IUCN).

These solidary wild cats are nocturnal, which means they are active during the night and sleep during the day. They sleep in trees and bushes. Each night, they travel 1 to 5 miles (1.6 to 8 kilometers) to hunt, and kill one animal per every 3.1 hours of travel, according to Defenders of Wildlife.

Ocelots are not roaring cats; instead they "chuckle" when excited and may "mutter" to one another, according to the San Diego Zoo. They yowl during courtship.

Ocelots hunt prey on the ground and climb trees to hunt, as well. They are carnivores, so they only eat meat. As carnivores, ocelots have special teeth for eating meat. They are picky eaters; they will remove the fur and feathers from their prey before they eat it. Then their sharp incisors tear meat from the bone and their back teeth cut the meat into smaller pieces like scissors.

Typically, their prey includes frogs, iguanas, rabbits, fish, crabs, rodents, monkeys and birds, according to National Geographic. To prevent waste, ocelots will hide their prey and come back to finish it when they are hungry again.

Male and female ocelots mate between 5 and 10 times daily during mating season, according to the University of Michigan's Animal Diversity Web (ADW). They must mate so many times because it is very hard to get a female ocelot pregnant.

If the female does become pregnant, she will have a gestation period of around 79 to 85 days and will give birth to one to three babies. Baby ocelots are called kittens.

Kittens are very small at birth, weighing only 7 to 12 ounces (200 to 340 grams). Born with sealed eyes, kittens gain their first glimpse of their mother at 14 days old. They are then weaned at 6 weeks old.

Here is the classification of ocelots, according to the Integrated Taxonomic Information System (ITIS):

ITIS also lists 10 subspecies. However, the IUCN's Cat Specialist Group says more recent molecular analysis has detected only four distinct clusters, so the taxonomy of ocelots is under review.

As a species, ocelots are not endangered, according to the IUCN. They are classified as least concern because they have a wide distribution, from northern Argentina to the southwestern United States, and a population of over 40,000 adults in just Brazil. Their total population ranges from around 800,000 to 1.5 million, according to Defenders of Wildlife.

However, in specific regions, ocelots face threats. Populations in Colombia, Argentina and areas of Brazil outside the Amazon basin are listed as vulnerable. In Mexico and the United States, the ocelot population is listed as endangered. In Texas, the numbers have declined dramatically, the Cat Specialist Group said. It is estimated that there are only 50 to 80 individuals.

Between the 1960s and 1980s, an extensive fur trade developed, according to the IUCN. More than 566,000 pelts were officially commercialized. A coat made of ocelot fur could sell for $40,000, according to the ADW. But since 1989, ocelots have been protected with import bans on all spotted cat species. Hunting is banned in most of South and Central America and the United States.