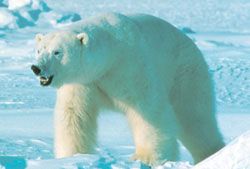 The Endangered Species Act of 1973 was created to protect animals and plants that were in danger of becoming extinct. "Nothing is more priceless and more worthy of preservation than the rich array of animal life with which our country has been blessed," said President Richard Nixon while signing the act on December 28, 1973.

According to the U.S. Fish and Wildlife Service, which administers the act along with the National Marine Fisheries Service, a species may be listed as either endangered or threatened. "Endangered" means a species is in danger of extinction throughout all or a significant portion of its range. "Threatened" means a species is likely to become endangered within the foreseeable future. All species of plants and animals — including subspecies, varieties and, for vertebrates, distinct population segments — are eligible for listing, except pest insects.

As of May 10, 2016, the act listed 1,367 species of animals and 901 species of plants as endangered or threatened. [In Photos: Endangered and Threatened Wildlife]

The Endangered Species Act (ESA) was not the first act of its kind. It replaced the Endangered Species Conservation Act of 1969. But even before that, the U.S. government was steadily making the world a safer place for animals. It started when President Theodore Roosevelt created the first National Wildlife Refuge at Pelican Island, Florida, in 1903.

Almost 50 years later, the Endangered Species Preservation Act of 1966 authorized land acquisition that would be used to conserve selected species of native fish and wildlife. The Endangered Species Conservation Act of 1969 expanded on the 1966 act. It authorized a list of threatened animals that faced worldwide extinction and prohibited importation of threatened animals without a permit. Besides mammals, fish, birds and amphibians, sea creatures such as crustaceans and mollusks were added as protected creatures.

In 1973, the world came together in Washington, D.C., to take the protection of animals even further. According to the U.S. Fish and Wildlife Service, the Convention on International Trade in Endangered Species of Wild Fauna and Flora (CITES) gathered 80 nations to sign a treaty to to regulate or prohibit international trade of endangered species except by permit.

What the act covers

While the CITES treaty worked to protect species worldwide, the United States created the Endangered Species Act of 1973 to cover domestic issues. It increased protection for all plant and animal species listed as threatened or endangered, as well as their critical habitats. A critical habitat was defined as one that is vital to the survival of endangered or threatened species.

According to the U.S. Fish and Wildlife Service, the act:

Congress has amended the ESA several times, but these have been small changes, and the original act is still mostly intact. For example, in 1978 the act was amended so that the definition of species in relation to populations was restricted to vertebrates. The U.S. Fish and Wildlife Service covers the amendments of the act over the years in their fact sheet, "A History of the Endangered Species Act of 1973."

Animals protected by the act

Of the 2,268 species that are listed as endangered or threatened by the ESA, 673 are foreign species that are found only in areas outside of the United States, according to the National Oceanic and Atmospheric Administration (NOAA).

The number of species in each group of animals and plants includes:

New animals are added to the list as needed, so it is constantly evolving. Animals that are being investigated for addition to the list are called "candidate" species. The U.S. Fish and Wildlife Service oversees the listing and protection land animals, plants and freshwater fish while the National Marine Fisheries Service oversees marine fish and wildlife.

Several species have been saved by this act. "The American alligator, bald eagle, peregrine falcon and the brown pelican are prime examples of species dwindling to record low numbers and coming close to extinction, but being able to rebound with the protections and actions provided in the act," said Brian Ogle, an anthrozoology instructor at Beacon College in Leesburg, Florida.

The act hasn't been accepted completely by some, though. "The Endangered Species Act is one of the most comprehensive pieces of legislation focusing on wildlife protection; however, it was and remains very controversial," Ogle told Live Science.

Some think that the act hinders economic development and provides federal agencies with more control than state agencies. Often, when an endangered animal is found on public land, use of the land is strictly regulated, which can inhibit farming, logging and other commercial use of the land. Some have called for further, in-depth research on the economic effects of the ESA.

Opponents also argue the recovery period for species listed often takes too long and is not as effective as some say it is. "One of the most noticeable changes that came about because of the ESA centers on the land-use provisions and the penalties that can be assigned to public and private land owners for not following the provisions," said Ogle.

This can be a concern because landowners are central to the protection of many species. Some think that the act does not necessarily help to promote conservation actions or support innovative approaches, but rather it centers on punishing those causing harm to endangered species unfairly.