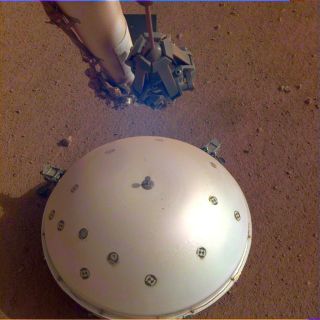 Insight's seismometer on the surface of Mars.
(Image: © NASA)

Scientists might have just recorded the first-ever "marsquake" on the Red Planet.

Last December, NASA's Interior Exploration using Seismic Investigations, Geodesy and Heat Transport (InSight) mission's lander extended its robotic arms and placed a seismometer — a device that measures quakes — onto Mars' surface. The device has been listening for quakes ever since.

The seismometer, developed by the French government agency National Centre for Space Studies, detected the first subtle quake-like rumble on April 6, according to a statement. Though scientists don't know exactly what caused it, they think it was a marsquake, and not a disturbance caused by wind or other environmental conditions.

The reason for suspecting a marquake is that the signals picked up on the Red Planet were similar to those of moonquakes measured by Apollo missions in the past, according to the statement. [Mars Insight Photos: A Timeline to Landing on the Red Planet]

The InSight team is searching for marsquakes to better understand how rocky planets formed. The causes of quakes on Mars are fundamentally different from those that cause temblors on Earth; marsquakes could help scientists understand what our planet looked like in its infancy.

While earthquakes are primarily driven by tectonic plates (which are composed of both Earth's crust and the outer layer of its mantle), Mars doesn't have tectonic plates. Instead, quakes on Mars are caused by faults or fractures in the crust. Meteorite impacts, surface shrinkage due to planetary cooling, or the pressure of magma pushing up toward the surface can cause these cracks, Live Science previously reported.

As these vibrations move through the Red Planet, they bump into and reflect off of different materials underground. Since different materials transmit and reflect these waves differently, scientists can use seismometer data to create a 3D view of the Martian interior — which still holds hints of its early history. By contrast, Earth's interior has been wiped of its early history by the constant churning of its tectonic plates, which, over millions of years, buries crust in the planet's interior even as it brings elements of the core to the surface.

This first potential marsquake was very small — if it had happened on our planet, our devices wouldn't even have registered the event; therefore, the Martian temblor won't tell us much about the interior of the Red Planet.

Even so, it's a thrilling first for the scientists involved.

"InSight's first readings carry on the science that began with the Apollo missions," Insight's Principal Investigator Bruce Banerdt, a scientist at the Jet Propulsion Laboratory in California, said in the statement. "We've been collecting background noise up until now, but this first event officially kicks off a new field: Martian seismology."