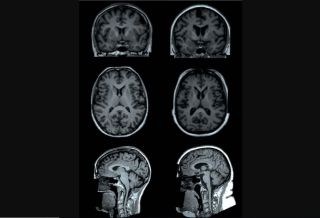 A new study finds that higher levels of body fat are tied to lower brain volumes in certain areas. Above, brain MRI scans of two participants in the study (both are women age 65 years old). One participant had a body fat percentage of 13% (left), and the other had a body fat percentage of 49% (right.) The MRIs show lower gray matter volumes in the central brain areas ("subcortical" regions) of the participant on the right, compared with the left.
(Image: © Radiological Society of North America)

Obesity is tied to a slew of harmful effects in the body, and now, a new study suggests it may also affect brain structure.

The researchers analyzed brain scans and found that higher levels of body fat were tied to lower brain volumes in certain areas. Specifically, too much body fat was linked to reduced amounts of gray matter — the brain tissue that contains nerve cells — in structures in the center of the brain, the researchers said.

The link between body fat and brain volume was stronger among men compared with women, according to the study, published today (April 23) in the journal Radiology.

The researchers, from Leiden University Medical Center in the Netherlands, also saw changes in the brain's white matter — long nerve fibers that allow areas of the brain to communicate — tied to body fat. [10 Things You Didn't Know About the Brain]

The study adds to a growing body of research linking obesity with changes in the brain, including lower brain volumes, or brain shrinkage. Previous studies have also found a link between obesity and brain diseases such as dementia.

Still, the new study showed only an association between body fat and lower brain volume and can’t prove that too much body fat actually causes brain shrinkage, or vice versa.

More studies are needed to investigate that link and to determine whether weight loss could benefit the brain, the authors said.

Obesity and the brain

Some previous studies have found a link between obesity and lower brain volumes as well as changes in white matter. But those studies tended to be small, and they used indirect measures of body fat, such as body mass index (BMI), which is a ratio of weight to height.

In a study published in January, researchers also found a link between belly fat and lower brain volumes, but this study used waist-to-hip ratio, another indirect measure of obesity.

In the new study, the researchers analyzed information from 12,087 people living in the United Kingdom, with an average age of 62. Participants underwent an MRI to assess their brain's gray- and white-matter structure. Researchers also measured participants' body fat levels using a method called bioelectrical impedance, which sends small electric currents through the body to estimate a person's percentage of body fat.

The researchers found that, in men, high levels of body fat were linked with a lower gray matter volume overall and lower volumes in certain gray matter areas in the center of the brain. Those include the thalamus, caudate nucleus, hippocampus, globus pallidus, putamen and nucleus accumbens. Some of these areas are involved in the brain's reward circuit, and others help to regulate body movements.

Among women, the researchers found a link only between body fat and reduced volume in the globus pallidus.

But among both men and women, high body fat levels were linked with differences in the microscopic structure of the white matter, as compared with people who had lower levels of body fat.

It's not clear why body fat levels are linked with reduced brain volume or differences in white matter. One idea is that high levels of body fat may produce inflammation that harms brain tissue. The smaller brain volumes seen in the study could indicate a loss of neurons in those areas, the researchers said.

Still, because the study was conducted at one point in time, it's unclear if obesity changes the brain or if people with lower volumes of gray matter in certain areas are at a higher risk of obesity.

Future studies should follow people forward in time to examine whether changes in body fat indeed result in changes in brain structure, the researchers said.