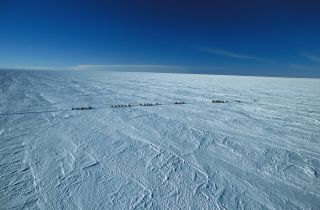 Researchers on their way to Dome C near the Concordia station on the Antarctic Plateau in Antarctica.
(Image: © Yann Arthus-Bertrand via Getty Images)

European scientists looking for some of the oldest ice on the planet have homed in on a particular spot in Antarctica, where they will drill more than 1.5 miles (2.7 kilometers) below the surface of the ice.

Over the next five years, the "Beyond EPICA-Oldest Ice" mission will work at a remote location known as "Little Dome C" to start drilling for ice up to 1.5 million years old, the team announced today (April 9) at the meeting of the European Geosciences Union in Vienna, Austria.

"Ice cores are unique for geosciences because they are an archive of the paleo-atmosphere," said Beyond EPICA's coordinator Olaf Eisen of the Alfred Wegener Institute in Germany. [Antarctica: The Ice-Covered Bottom of the World (Photos)]

From analyzing gas bubbles, molecules and particles trapped in thin layers of ancient ice, scientists can reconstruct carbon dioxide levels, temperature data and other climate indicators over a long period of time. A major goal of this project will be to understand why the cycle of Earth's ice ages changed in the distant past.

The expedition will build on a past mission, EPICA (the European Project for Ice Coring in Antarctica), which took place from 1996 to 2004 at the Concordia research station, jointly operated by France and Italy. The EPICA researchers were able to obtain an ice core with an 800,000-year record of climate data. During this period, the climate flipped from glacial to interglacial periods on a 100,000-year cycle.

The EPICA core, however, "doesn't cover the time between 900,000 and 1.2 million years ago, where we had a transition in the climate system," Eisen told reporters during a press conference.

Prior to 1.2 million years ago, Earth's ice ages are believed to have been alternating on a quicker, 40,000-year cycle. Scientists don't know what happened during the following transition period in the climate system that caused the glacial periods to get longer and colder. The Beyond EPICA researchers hope to find some answers in the ice from Little Dome C as well as data that will help them build climate forecasts for the future.

About 2 miles (3.2 km) above sea level, Little Dome C is about 18 miles (30 km) from Concordia station — or a 2-hour snowmobile ride. The average temperature at the drill site is minus 66 degrees Fahrenheit (minus 54.5 degrees Celsius), and the team will work only the two months during the Antarctic summer, camped out in shipping containers.

The area around Little Dome C is also very dry and hardly sees precipitation, which is good for the goal of the project.

"The smaller the accumulation rate of snow every year, the more years you have in each meter," said project scientist Catherine Ritz, of France's Institute for Geosciences and Environmental Research (IGE).

Having more layers packed in tightly is important because, closer to the bedrock, ice can melt due to the heat from beneath the surface of Earth. Melting at the bottom is the reason the previous EPICA ice core only had layers back to 800,000 years.

It will likely take the Beyond EPICA team years to reach those ancient layers of ice as they remove 13-foot-long (4 meter), 4 -inch-wide (10 centimeters) tubes of ice at a time. That also means the most important results of the project won't come out until at least 2025.

The European Union-funded project is estimated to cost about €30 million euros ($33.8 million), according to the BBC.