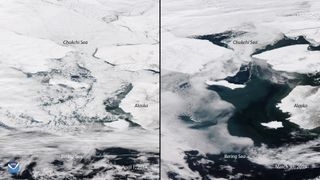 An image on the left shows the iced-over Bering Sea this time of year in 2014. On the right is the Bering Sea melted as of Sunday, March 31.
(Image: © NOAA)

Humans are living through a dramatic transformation of the planet's surface due to climate change, with the most obvious sign being the rapid decline in Arctic sea ice. And now, imaging has revealed perhaps a new chapter in that decline: The Bering Sea, which under normal circumstances should remain frozen-over until May, is almost entirely free of sea ice in early April.

Part of what makes this event so stunning, as the National Oceanic and Atmospheric Administration (NOAA) pointed out in a statement, is that the Arctic sea ice should be reaching its annual maximum right now. The summer reduction in sea ice normally only begins around now. And that process has, throughout recorded history, left the region between Russia and Alaska frozen at this time of year. But 2019 already has the lowest Arctic sea ice extent on record (beating 2018, which was also a record-breaker). And that's manifesting in an unseasonably liquid sea off Alaska's northwest coast.

The dramatic ice-melt in the Arctic won't drive up sea levels directly. That ice was already floating in the ocean, so it already counted toward the ocean's total volume. But the melting will have tangible effects both on the planet's climate and on the people and economies that rely on the Arctic region. [In Photos: Devastating Wildfires in California]

As Live Science has previously reported, surface ice acts as a kind of climate regulator. The surface of ice is bright white, so it reflects sunlight back into space. When the planet has lots of ice on its surface, less of the sun's energy stays on Earth, and the planet warms more slowly.

But open water is darker and absorbs more sunlight, turning it into heat. So, while sea ice loss is caused by climate change, it also causes climate change to speed up.

A more immediate impact: The loss of ice cover on the Bering Sea means the water there will be warmer this year, according to NOAA.

"This low ice extent has had a substantial economic impact on the coastal communities that rely on the ice for crabbing, fishing and even walrus hunting," NOAA said in its statement.

Commercial fisheries are also likely to be affected for years, the agency said.

At this point, the decline in Arctic sea ice is likely to continue for a long time. But the question of how far that decline will go is wrapped up in questions of how much carbon and other greenhouse gases humans continue to pump into the atmosphere — behaviors that lead to planet warming and ice melt. The sea ice loss we're seeing now is happening in the context of a world warmed by 1 degree Celsius (1.8 degrees Fahrenheit) above pre-industrial levels. A world warmed by 1.5 degrees C (2.7 degrees F) would involve even more-extreme and life-threatening changes, according to the International Panel on Climate Change (IPCC). And a world warmed 2 degrees C (3.6 degrees F) would look dramatically different even from that – with longer heatwaves, less food available, and more regions of the planet becoming dangerous to inhabit. A world warmed by 3 degrees C (5.4 degrees F), would be even more dramatically different. And so on.

The question of whether that happens has less to do at this point with natural forces than collective human decisions.