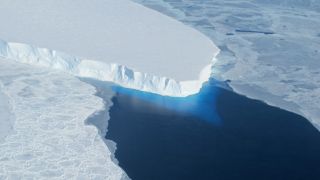 The seas are rising. But just how dire is the situation?

That's the question that a huge team of international scientists is hoping to answer as it prepares to launch a major study of one of the main culprits of sea level rise: the Thwaites glacier.

More than 100 scientists from the U.S., United Kingdom, and other countries will begin a $27.5 million study of the glacier, which is located in West Antarctica, according to a report in The Guardian. Thwaites, as Live Science has previously reported, is one of a small cluster of glaciers that act like corks, holding back the enormous ice masses of the West Antarctic Ice Sheet. And, like its cousins, Thwaites' melting has accelerated rapidly in recent years.

According to The Guardian, ice from Thwaites streaming into the ocean accounted for about 4 percent of total global sea level rise in recent years — twice its contribution from the mid-1990s. That's a significant amount of water coming off of one glacier. The National Oceanic and Atmospheric Administration reports that, globally, sea level has risen about 2.6 inches (6.6 centimeters) above the 1993 average, and it continues to rise by about one-eighth of an inch (3.2 millimeters) per year. Studying Thwaites, the scientists hope, could help them figure out how much worse the situation is going to get.

Glaciers like Thwaites matter a great deal to sea level for a simple reason: They're large masses of landlocked ice that hold back even larger masses of ice, keeping them from sliding into the sea.

Landlocked ice changes sea level because when it melts, it introduces new water to the ocean, and this water isn't likely to leave the ocean anytime soon. Sea ice, on the other hand, like the ice cap in the Arctic, can have major effects on climate when it melts. But it's fundamentally water that's already in the ocean. Whether it's liquid or solid doesn't directly affect sea level around the world.

But Thwaites and its ilk are the main feeders of water mass driving sea level rise. And as scientists have studied these ice masses, they've only discovered more signs of how bad the situation is — and how bad it could get. Back in 2013, for example, scientists found "swamp-like waterways" under Thwaites that strip away its ice mass and lubricate it against the ground, accelerating its rush toward the sea.

The new project aims to understand the situation at Thwaites in greater detail than ever before and offer a deeper peek into our collective climate future.

Editor's Note: This article was updated to correct a metric conversion. One-eighth of an inch is 3.2 mm, not 32 mm as was stated.