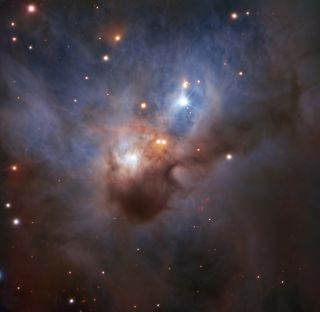 Swooping out of the darkness beyond Orion's right hip, a gargantuan bat of dust and gas spreads its ghostly wings through the cosmos.

This great beast 2,000 light-years away from Earth — actually a nebula called NGC 1788, nicknamed the "Cosmic Bat" — is barely visible with the naked eye, but was recently imaged in stunning detail by astronomers from the European Southern Observatory (ESO). [15 Unforgettable Images of Stars]

The Cosmic Bat is a reflection nebula, meaning it glows "like fog around a street lamp," as NASA puts it, by scattering the light from small, baby stars buried deep within the nebula’s dust. These stars are thought to be very young — only about 1 million years old, stellar newborns compared to our own 4.6-billion-year-old sun.

In the arc of the bat's wings, astronomers believe that they can read the brief history of these young stars. The oldest ones of the bunch are positioned toward the left side of the nebula, closer to the massive stars of the Orion constellation proper, while the youngest stars gather at the right. ESO scientists think that this means the nebula was formed by a gale of stellar winds released over millions of years by the big, hot stars of Orion.

This new image of the Bat was released to commemorate the 20th birthday of FORS2, a versatile imaging instrument mounted on the ESO's Very Large Telescope. The instrument has helped astronomers uncover some of the most stunning and bizarre landmarks in our cosmic neighborhood, including a shrieking portrait of the "Skull and Crossbones" nebula.

Spooky space gems like these are just one more reason that nature is totally metal.