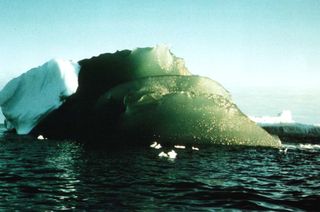 Just in time for Saint Patrick's Day, scientists think they might know why some Antarctic icebergs are green.

The reason could be iron oxide dust ground down by glaciers on the Antarctic mainland. If the theory holds, it means that the green 'bergs are more than just a quirk of the Southern Ocean. In fact, they might be crucial to the movement of ocean nutrients.

"It's like taking a package to the post office," study leader Stephen Warren, a glaciologist at the University of Washington, said in a statement. "The iceberg can deliver this iron out into the ocean far away, and then melt and deliver it to the phytoplankton that can use it as a nutrient." [Antarctica: The Ice-Covered Bottom of the World (Photos)]

The mystery of the green icebergs

Warren has been on the case of the green icebergs for more than 30 years. He first took samples from one of these green hunks of ice in 1988, near the Amery Ice Shelf of East Antarctica.

"When we climbed up on that iceberg, the most amazing thing was actually not the color but rather the clarity," Warren said. "This ice had no bubbles. It was obvious that it was not ordinary glacier ice."

Most glacial ice occurs in shades of white to brilliant blue. The more blue the ice, the older it is, typically: Compression from accumulating layers of snow pushes air bubbles out of the ice, reducing the scattering of white light. The compressed ice absorbs most of the light spectrum except for blue, creating the otherworldly turquoise seen in the hearts of icebergs and glaciers.

The green ice was similarly bubble-free, and yet it looked green instead of blue. Warren and his team soon found that the green ice came not from glaciers, but from marine ice. That's the ice from the undersides of floating ice shelves.

At first, the team thought that organic material stuck in the marine ice was causing the green hue. Because dissolved carbon is yellow, they reasoned, the addition of organic material might meld with the usual blue of the ice to create green. But subsequent research showed that the green marine ice didn't have a higher-than-usual amount of organic impurities.

Now, a new study finds that a different sort of impurity may be the root cause of the green ice. Writing Jan. 10 in the Journal of Geophysical Research: Ocean, Warren and his colleagues report that the marine ice at the bottom of the Amery Ice Shelf has 500 times more iron than the glacial ice above.

This iron comes from the rocks under the Antarctic Ice Sheet, which are ground into a fine powder as glaciers move over them. The ice-bound iron oxidizes as it contacts seawater. The resulting iron oxide particles take on a green hue when light scatters through them.

When icebergs break off the larger ice shelf, they carry this iron-rich ice (and the brilliant color) with them.

The researchers will need to sample more icebergs and chemically analyze their minerals to be sure their theory is correct. But if they are right, the green icebergs might be an important transport for iron to far-flung locations in the Southern Ocean, Warren and his colleagues wrote. Iron is a key nutrient for the growth of phytoplankton, but it's in short supply in the southern seas. The icebergs might be able to carry the nutrient far from shore, enabling life to blossom where it otherwise wouldn't.

"We always thought green icebergs were just an exotic curiosity," Warren said, "but now we think they may actually be important."