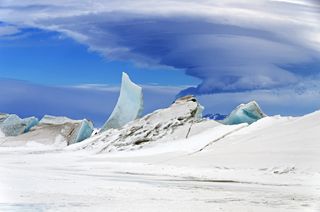 One of the most amazing sights in Antarctica is its stunning blue ice, rippling like a frozen sea.

Patches of blue-hued ice emerge where wind and evaporation have scoured glaciers clean of snow. The translucent, wind-polished surface reflects a stunning turquoise color when the polar sun peeks above the horizon. Antarctica is the only place on Earth with these incredible stretches of blue ice.

Blue ice is treacherously slippery, making walking on the surface a challenge, but people risk it for the chance to trek back through time. That's because blue ice is some of the oldest ice in Antarctica. On the continent, scientists have dug up blue ice that is 1 million years old, and researchers are searching for even older ice.

When glacial ice first freezes, it is filled with air bubbles. As that ice gets buried and squashed underneath younger ice on top, the older ice starts to take on a blue tinge. As the ice grows denser, the bubbles become smaller and smaller.

Without the scattering effect of air bubbles, light can penetrate ice more deeply. To the human eye, ancient glacial ice acts like a filter, absorbing red and yellow light and reflecting blue light, creating the beautiful blue hues of a glacier.

In contrast, snow is white because it is chock full of air bubbles. Snow reflects back the full spectrum of white light, just like a freshly poured soda has bubbly, light-colored foam on top.

Blue ice sometimes emerges at the edge of Antarctica, where glaciers tumble into the sea. Summertime melting can also create smooth patches of blue glacial ice. But by definition, true blue-ice areas most often appear near Antarctica's mountain ranges.

The continent's great glaciers are like slow-moving rivers of ice. When these flows hit a barrier, such as a mountain range, the deeper layers of ice are forced upward, like water flowing over a submerged rock in a riverbed. Blue ice also tends to surface on the lee side of mountains, where fierce winds strip away snow and ice. Over time, the older layers are revealed through evaporation.

Blue ice covers only about 1 percent of Antarctica, according to a 2010 study in the journal Antarctic Science. Blue-ice areas usually extend for a few miles (a few kilometers) in any direction.

Antarctica's blue ice turns out to hold a rare treasure: meteorites. More than 25,000 meteorites have been collected from blue-ice areas in Antarctica. The evaporating glacial ice leaves behind meteorites that have fallen on the frozen continent over the course of thousands of years, concentrating the space rocks in one small area. Meteorite hunters make annual pilgrimages to blue-ice patches, scanning the ice while traveling in snowmobile caravans.

Blue-ice areas are also used as runways, for landing aircraft with wheels instead of skis. Governments including Italy, Australia, Norway, Russia and the United States all operate blue-ice runways.