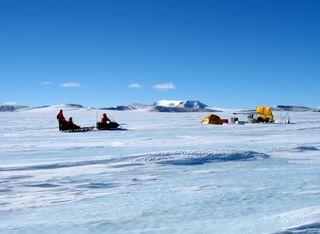 A whiff of air frozen in ice for 1 million years provides a new snapshot of Earth's ancestral climate.

Scientists uncovered the ancient climate record from Antarctic blue ice. The ice core was drilled from a region called the Allan Hills, about an hour by plane from the McMurdo research station. Bubbles inside the ice are tiny windows into Earth's former atmosphere. Gases such as carbon dioxide and methane were trapped and preserved inside the bubbles when snow fell in the past.

Though the ice core doesn't capture a continuous climate record, the "time machine" does offer the oldest picture yet of Earth's bygone climate from Antarctic ice, researchers said.

The timeworn ice suggests a strong link between carbon dioxide levels and glacial cycles for the past million years. In the oldest ice, levels of the greenhouse gas were about 30 parts per million (ppm) higher, at most, than more recent measurements from between 800,000 to 450,000 years ago, according to the findings, reported today (May 11) in the Proceedings of the National Academy of Sciences. Parts per million denotes the volume of a gas in the air; in this case, for every 1 million air molecules, 300 are carbon dioxide. [Album: Stunning Photos of Antarctic Ice]

The new findings could help scientists tackle a big question in climate science. About 1 million years ago, Earth's ice ages would wax and wane on a roughly 40,000-year cycle, different than today. After around 800,000 years ago, the planet entered a cooler climate phase and the ice ages shifted to a 100,000-year cycle. Many researchers think lower carbon dioxide levels were a key player in the changeover. Directly measuring levels of the gas could reveal whether a drop in carbon dioxide triggered the flip.

The ice analysis reveals there weren't any major swings in greenhouse gas levels while the planet was in its warmer phase, an interglacial period, before 800,000 years ago, the study reported. Also, for the past 1 million years, carbon dioxide levels never rose above about 300 ppm. (Carbon dioxide levels are currently at about 400 ppm and rising due to human activity, such as fossil fuel emissions.)

"In general, the variability is like what we've seen for the last 800,000 years, and this is not unexpected," Higgins told Live Science. "We're seeing a very strong correlation between carbon dioxide and glacial cycles that extends back a million years."

Higgins also said that levels of atmospheric methane were surprisingly low in the oldest ice, for reasons that are as yet unknown.

The study is only a first step in filling in the climate record during this critical shift in Earth's temperature. Because the ice is so old, the layers are no longer stacked like pancakes. Some layers are missing, so there is a gap of missing time reported in the study, between the oldest ice and the ice at the surface.

The ice was drilled from the "blue ice" region of the Allan Hills. Blue ice forms where landmasses such as mountain ranges force glacial ice to flow upward, bringing old ice to the surface. Strong winds in the region also scour and remove snow and ice from the surface, further exposing the old ice.

The research team plans to return to Allan Hills this winter to collect more ice for further testing, Higgins said. Antarctic scientists hope to eventually find ice that may date back as far as 2.5 million years.