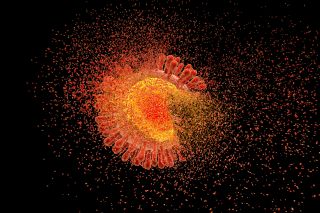 A man in the United Kingdom may be the second person ever to be cured of HIV.

The new patient, who was diagnosed with the virus in 2003, appears to be HIV-free after a special bone-marrow transplant, according to a new report of his case.

The researchers caution that it's too soon to say for sure if the man has been definitively cured of HIV. But the patient has experienced long-term remission from the virus without the need for medications for 18 months. [27 Devastating Infectious Diseases]

The case marks only the second time ever that doctors have used this particular treatment to seemingly eliminate the virus from a person's body. The first patient — known as the Berlin patient — received a similar bone-marrow transplant in 2007 and has been HIV-free for more than a decade.

"By achieving [HIV] remission in a second patient using a similar approach, we have shown that the Berlin patient was not an anomaly, and that it really was the treatment … that eliminated HIV in these two people," lead study author Dr. Ravindra Gupta, a professor in the Division of Infection and Immunity at University College London, said in a statement.

However, the researchers stress that such a bone-marrow transplant would not work as a standard therapy for all patients with HIV. Such transplants are risky, and both the Berlin patient and the man in the new case, called the London patient, needed the transplants to treat cancer, rather than HIV.

But future therapies could aim to mimic the treatment without the need for a bone-marrow transplant.

The report will be published today (March 5) in the journal Nature.

Prior to his transplant, the London patient was taking antiretroviral medications to manage his HIV. In 2012, he was diagnosed with Hodgkin's lymphoma, a type of blood cancer that required treatment with a bone-marrow transplant, also known as hematopoietic stem cell transplant.

The stem cells used for the transplant came from a donor who had a relatively rare genetic mutation that confers resistance to HIV. Specifically, the donor had a mutation in a gene that codes for a protein called CCR5, which HIV uses as a "port" to get inside cells. Essentially, the mutation prevents HIV from being able to get inside people's cells, so it cannot cause infection.

The London patient has been off HIV medications for 18 months now, and is still HIV-free, the researchers said. They will continue to monitor the patient to determine if he has been definitively cured (meaning the HIV does not come back).

The new case report is "another proof of concept that we can eradicate HIV in theses situations," said Dr. Amesh Adalja, a senior scholar at the Johns Hopkins Center for Health Security in Baltimore, who was not involved in the report.

Although a bone-marrow transplant cannot be a standard treatment for HIV, doctors can use what they learn in these special cases to try to develop new treatments that could be used by more people, Adalja said.

For example, the Berlin patient and the London patient "show that when you eliminate CCR5, you can effectively cure these patients," Adalja said. So doctors could develop other ways to target CCR5, such as with gene therapy, to prevent the expression of the gene.

Such a gene therapy would be very different from what happened to twin babies in China last year, who reportedly had their genomes edited with CRISPR to remove the CCR5 gene. The goal of such editing, the scientist who did it said, was to reduce the babies' risk of getting HIV. But in that case, the babies had their genes edited before birth and did not have HIV to begin with.

"Going after CCR5 in … patients who already have HIV might be a very powerful tool we can use," and is not the same thing as genome editing in people who don't have HIV, Adalja said.