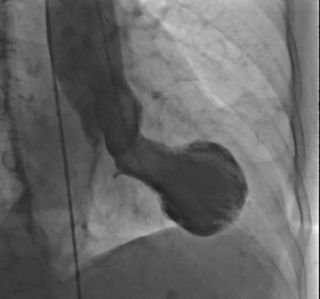 Broken-heart syndrome weakens the muscles of the heart, causing its left ventricle to enlarge. The heart takes on a shape like a “takotsubo,” a Japanese fishing pot used to trap octopuses. The condition is also known as takotsubo cardiomyopathy.
(Image: © Prof. Dr. Christian Templin; University Hospital Zürich)

The origins of a broken heart may be found in the brain.

Or, more specifically, the origins of a condition called "broken-heart syndrome."

Broken-heart syndrome, or takotsubo cardiomyopathy, occurs when the heart muscles suddenly weaken, causing the heart to change shape. The condition is typically brought on by extreme emotion or stress, such as the loss of a loved one. [9 New Ways to Keep Your Heart Healthy]

Now, a new study finds that the brain also appears to play a role: Researchers discovered that in people who develop broken-heart syndrome, areas of the brain responsible for controlling a person's stress response don't function as well as they do in people without broken-heart syndrome. The findings were published March 5 in the journal European Society of Cardiology.

Broken-heart syndrome has symptoms similar to a heart attack, including chest pain and shortness of breath. And although it can have lasting consequences, most people who develop the condition recover completely without any permanent damage to the heart, according to the Genetic and Rare Diseases Information Center.

But it’s still unclear why some people develop this condition and others don't, said study co-author Jelena-Rima Ghadri, a senior research associate at the University Hospital Zurich, in Switzerland. Because it's typically triggered by extreme emotions, Ghadri and her team decided to examine the brain's role.

To do so, the team scanned the brains of 15 female patients who had previously developed broken- heart syndrome. The brain scans took place in 2013 and 2014; patients had been diagnosed, on average, about a year before the scan. The scans were performed at the University Hospital Zurich as part of the interTAK Registry, an international registry for people with broken heart syndrome; Ghadri is a co-principal investigator on the project.

The brain scans were compared with another 39 brain scans, taken in patients without broken-heart syndrome. The researchers found that people with the condition had fewer connections between brain regions associated with emotional processing and the autonomic nervous system — the apparatus that controls automatic processes in our bodies such as blinking and heartbeat.

Neurons form connections in order to talk with one another and send signals across the brain. If those connections are sparse, different regions of the brain cannot communicate well enough to form a course of action, such as an appropriate response to a stressful situation.

Previous research has shown that abnormal activity in the amygdala in particular — an area of the brain involved with fear — has been linked to an increased risk of heart disease according to the study. But exactly how less chatter among these regions exactly leads to the changes characteristic of broken heart syndrome is still not known, Ghadri told Live Science.

Ghadri said she hopes that future research will be able to disentangle these findings, and also help doctors understand who is at risk for broken-heart syndrome and why. Broken-heart syndrome "clearly involves interactions between the brain and the heart," Ghardi said. It is "in fact a brain-heart-syndrome."