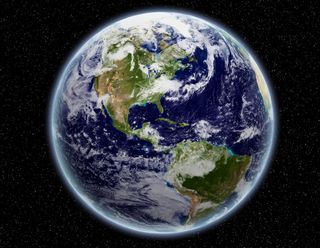 The Milankovitch cycles describe how relatively slight changes in Earth's movement affect the planet's climate. The cycles are named for Milutin Milankovitch, a Serbian astrophysicist who began investigating the cause of Earth's ancient ice ages in the early 1900s, according to the American Museum of Natural History (AMNH).

Earth experienced it's most recent ice ages during the Pleistocene epoch, which lasted from 2.6 million years ago to 11,700 years ago. For thousands of years at a time, even the more temperate regions of the globe were covered with glaciers and ice sheets, according to the University of California Museum of Paleontology.

To determine how Earth could experience such vast changes in climate over time, Milankovitch incorporated data about the variations of Earth's position with the timeline of the ice ages during the Pleistocene. He studied Earth's variations for the last 600,000 years and calculated the varying amounts of solar radiation due to Earth's changing orbital parameters. In doing so, he was able to link lower amounts of solar radiation in the high northern latitudes to previous European ice ages, according to AMNH.

Milankovitch's calculations and charts, which were published in the 1920s and are still used today to understand past and future climate, led him to conclude that there are three different positional cycles, each with its own cycle length, that influence the climate on Earth: the eccentricity of Earth's orbit, the planet's axial tilt and the wobble of its axis.

The Earth orbits the sun in an oval shape called an ellipse, with the sun at one of the two focal points (foci). Ellipticity is a measure of the shape of the oval and is defined by the ratio of the semiminor axis (the length of the short axis of the ellipse) to the semimajor axis (the length of the long axis of the ellipse), according to Swinburne University. A perfect circle, where the two foci meet in the center, has an ellipticity of 0 (low eccentricity), and an ellipse that is being squished to almost a straight line has an eccentricity of nearly 1 (high eccentricity).

The tilt of the Earth's axis relative to the plane of its orbit is the reason that we experience seasons. Slight changes in the tilt changes the amount of solar radiation falling on certain locations of Earth, according to Indiana University Bloomington. Over the course of about 41,000 years, the tilt of the Earth's axis, also known as obliquity, varies between 21.5 and 24.5 degrees.

When the axis is at its minimal tilt, the amount of solar radiation doesn't change much between summer and winter for much of Earth's surface and therefore, seasons are less severe. This means that summer at the poles is cooler, which allows snow and ice to persist through summer and into winter, eventually building up into enormous ice sheets.

Today, the Earth is tilted 23.5 degrees, and slowly decreasing, according to EarthSky.

Earth wobbles just slightly as it spins on its axis, similarly to when a spinning top begins to slow down. This wobble, known as precession, is primarily caused by the gravity of the sun and moon pulling on Earth's equatorial bulges. The wobble doesn't change the tilt of Earth's axis, but the orientation changes. Over about 26,000 years, Earth wobbles around in a complete circle, according to Washington State University.

Now, and for the past several thousands of years, Earth's axis has been pointed north more or less toward Polaris, also known as the North Star. But Earth's gradual precessional wobble means that Polaris isn't always the North Star. About 5,000 years ago the Earth was pointed more toward another star, called Thubin. And, in approximately 12,000 years, the axis will have traveled a bit more around its precession circle and will point toward Vega, which will become the next North Star.

As the Earth completes a precession cycle, the orientation of the planet is altered with respect to perihelion and aphelion. If a hemisphere is pointed toward the sun during perihelion (shortest distance between Earth and sun), it will be pointed away during aphelion (largest distance between Earth and sun), and the opposite is true for the other hemisphere. The hemisphere that's pointed toward the sun during perihelion and away during aphelion experiences more extreme seasonal contrasts than the other hemisphere.