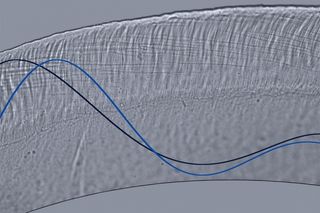 This optical microscope image illustrates wave motion in the tectorial membrane, a gooey membrane somewhat reminiscent of Jell-O that sits on top of the sensory hair cells in the cochlea. New research shows that the membrane is able to tune its stiffness to better translate sounds at certain frequencies into neural impulses.
(Image: © MIT Micromechanics Group)

In order to turn tangled, airborne vibrations into recognizable sounds, your ear relies on a miniature assembly line of bones, fibers, tissues and nerves. Then, there's the "Jell-O."

There's no actual gelatin in your ears, of course (if you're doing hygiene right). But according to Jonathan Sellon, a visiting professor at MIT and lead author of a new study in the journal Physical Review Letters, there is a thin, "Jell-O-like" blob of tissue spiraling through your inner ear and helping sound waves reach the specific nerve receptors they need to in order to make contact with your brain. This helpful blob is known as the tectorial membrane.

"The tectorial membrane is a gelatinous tissue that's made up of 97 percent water," Sellon told Live Science. "And it sits on top of the tiny sensory receptors in the inner ear (or cochlea) that translate sound waves into an electrical signal that your brain can interpret." [10 Amazing Things We Learned About Humans in 2018]

So, why cover your ears' hypersensitive sound-pickup equipment with a layer of Jell-O? Sellon wanted to know when he began researching the tectorial membrane eight years ago. Now, in their new study (published Jan. 16), he and his colleagues think they may be on to an answer.

With their tips poking into the membrane's gooey innards, the inner ear's sensory receptor cells (also known as "hair cells") run in bundles across the length of your cochlea, each one built to respond best to a different range of frequencies; high frequencies are best translated by cells at the base of the cochlea, while low frequencies amplify best at the top of the cochlea. Together, these hairy receptors allow you to hear thousands of different frequencies of sound.

"The tectorial membrane actually helps the cochlea separate out low-frequency sounds from high- frequency sounds," Sellon said. "The way it does that is by 'tuning' its own stiffness, sort of like the strings on an instrument."

Sellon and his colleagues extracted several tectorial membranes from lab mice. Using tiny probes, the researchers jiggled the membranes at various speeds to simulate how the gel might push against hair cells in response to different frequencies of sound. The team tested a range of frequencies between 1 hertz and 3,000 hertz, then wrote some mathematical models to extrapolate results for even higher frequencies (humans can typically hear between 20 hertz and 20,000 hertz, Sellon noted).

"It's kind of like a guitar or violin," Sellon said, "where you can tune the strings to be more or less stiff depending on the frequency you're trying to play."

How exactly does this Jell-O tune itself?

It turns out that water flows through microscopic pores inside the membrane. The pore arrangement changes how fluid moves through the membrane — thereby changing its stiffness and viscosity at different locations in response to vibrations.

This tiny Jell-O guitar might be critical for amplifying certain frequency vibrations at different positions along the cochlea, Sellon said, helping your ears optimize the conversion of sound waves from mechanical vibrations to neural impulses.

The pore arrangement allows hair cells to respond more efficiently to the middle range of frequencies — for example, those used for human speech — compared to sounds at the low and high ends of the spectrum. So, sound waves in those middle ranges are more likely to be converted into distinct neural signals, Sellon said.

The membrane's sensitivity might even serve as a natural filter that helps amplify faint sounds while dampening distracting noise — however, Sellon said, further research in living subjects is needed to better understand all the membrane's mysteries.

Still, the gel's tuning ability might help explain why mammals can face significant hearing impairment when born with genetic defects that alter the way water flows through their tectorial membranes. According to the authors, further research could help scientists develop hearing aids or pharmaceuticals that help correct such defects. When that day comes, we'll be all ears.