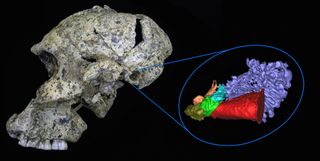 A side view showing the virtual reconstruction of the early hominin Paranthropus robustus skull and ear.
(Image: © Rolf Quam)

Human ancestors that lived about 2 million years ago had hearing abilities similar to those of chimpanzees, but their ears had some slight differences that made their hearing more humanlike, a new study finds.

The finding — based on virtual models of early hominin (the ancestors of modern humans), modern chimp and human ears — suggests that, unlike chimps, these now-extinct human ancestors had a remarkable sensitivity to high-frequency sounds. These types of sounds are used in modern-day human communication — including the sounds made by the letters "K," "T," "Th," "F" and "S" — and could have helped hominins detect short-range vocal communication during their time, the researchers said.

The authors suggested that the ability to hear short-range communication would have favored the open savanna, adding evidence that early hominins once lived there. [Gallery: See Images of Our Closest Human Ancestor]

"[The hominins'] hearing pattern is similar to a chimpanzee['s], but slightly different," said lead researcher Rolf Quam, an assistant professor of biological anthropology at Binghamton University in New York. "That difference seems to be in the direction of humans."

Previous studies have examined the differences between human and chimp ear anatomy and auditory abilities, but less is known about the hearing skills of early hominins, Quam said.

The researchers used these scans to make virtual reconstructions of the ears that included soft tissue. However, their models included some guesswork.

Other scientists have measured the "fleshy dimensions" of modern human ears (such as cartilage and skin), largely to gain a better understanding of hearing and to develop better hearing aids, Quam said. But nobody has extensively measured the fleshy parts of chimp ears, and unsurprisingly, these parts have long since decayed in the hominin samples, he said.

"So the model works for chimpanzees — and, therefore, [for] any possible human ancestor, it should also provide reliable results," Quam told Live Science.

Once the models were complete, the researchers ran a series of audio frequencies through them using a computer program.

The scientists already knew that modern humans can hear a wider range of frequencies — usually between 1 and 6 kilohertz (kHz) — than other primates can. This range includes sounds used in spoken language, which chimps and other primates can't hear as easily.

The results suggest that early humans had a greater sensitivity to some high-pitched frequencies than both modern humans and chimps do, the researchers said. This sensitivity is explained by the hominins' differences in anatomy, such as having a slightly shorter and wider external auditory canal (the tube that leads from the outer ear to the inner ear) and a smaller eardrum.

However, the hominins' ears still have small, primitive-looking stapes footplates (a bone in the middle ear that sends pressure waves into the inner ear when it vibrates), the researchers found.

Both early hominin species had a heightened sensitivity to frequencies between 1.5 and 3.5 kilohertz (kHz) compared with modern humans or chimps, they said. [Top 10 Mysteries of the First Humans]

There is other evidence that early hominins likely lived on the savanna: Studies have found that up to half of their diet consisted of plant resources found on the savanna, Quam said.

But Quam stressed that just because the hominins had sharp hearing, and possibly made high-frequency sounds, that doesn't mean that they had a language like modern humans do today.

"They certainly could communicate vocally," Quam said in a statement. "All primates do, but we're not saying they had fully developed human language, which implies a symbolic content."

A word of caution

This isn't Quam's first study on hominin hearing. Previously, he and his colleagues looked at the hearing capabilities of several fossil hominin individuals from Sima de los Huesos (Pit of the Bones) in northern Spain. These 430,000-year-old hominins, thought to be ancestors of the Neanderthals, have hearing abilities that are almost similar to those of modern humans, and unlike the more chimplike hearing of the African hominins studied in the new paper, he said.

However, people should be cautious about interpreting the findings of the study, said Bernard Wood, a professor of human origins at The George Washington University in Washington, D.C., who was not involved with the study.

"I applaud them for trying to do it," he said. "[But] my concern is that there are a whole bunch of assumptions that they have made [about hominin ears]."

It's also unknown whether hearing ability can be linked to what sort of environment the early hominins inhabited, so "one needs to be a little careful about joining these dots," Wood said.

The new study was published online today (Sept. 25) in the journal Science Advances.