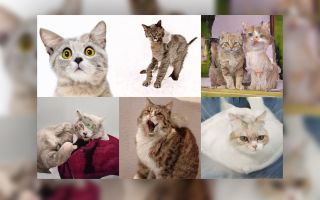 Artificial intelligence (AI) recently tried to generate cat photos from scratch, and the results were cat-astrophic.

This particular neural network (a type of AI modeled after the workings of the human brain) can produce astonishingly realistic original photos of human faces. In fact, the images of these made-up people were nearly impossible for human viewers to distinguish from photos of real people, programmers of the AI reported in a study that was posted December 2018 to the preprint journal arXiv.

Felines, however, proved to be another story. The same algorithm that generated flawless human faces created cats with misshapen heads; the wrong number of eyes and legs; and bodies that were too long, too short, unusually rotund or rectangular, and bent at peculiar angles. [5 Intriguing Uses for Artificial Intelligence (That Aren't Killer Robots)]

The AI engine that produced the creepy cat photos is what's known as "a style-based generator architecture for generative adversarial networks," or StyleGAN. Networks like these are "adversarial" because two models work simultaneously: One generates images, and another evaluates the results against photos in a training data set, so that the network learns from its mistakes and improves its performance, the study said.

For the AI to produce lifelike human images, it first had to "learn" what human faces looked like from existing photos. The algorithm broke the faces down into a checklist of style features, such as head position; gender; skin color; hair texture and style; and the shape of eyes, noses and mouths, the researchers reported.

Once StyleGAN was able to recognize all of those elements — without human supervision — it learned to assemble them independently to generate a brand-new, photo-realistic human face. The researchers declined an interview request but explained their process in a video posted to Youtube on Dec. 12, 2018.

So, why couldn't StyleGAN create adorably realistic cat photos? The algorithm was doing its best with what it had to work with — and when it came to cats, the thousands of reference images that it used were less than ideal, said Janelle Shane, a researcher who trains neural networks but was not involved in the study, told Live Science.

Shane wrote about the bizarre cats on Feb. 7 in on her blog AI Weirdness. Unlike StyleGAN's photo data set of human faces — in which bodies and backgrounds were cropped out and the head positions were similar to each other — the cat images in the data set varied wildly. The collection includes close-ups and wide shots of cats in a range of settings and against different backdrops. Some photos showed one cat, some included multiple cats, and others included people, too.

"There are upside-down cats; there are cats curled up in a ball; their eyes are open; their eyes are shut. You can definitely tell that their input data is a bit noisy — and by noisy, I mean there's stuff in there that's not just a picture of a cat," Shane said.

So, don't be too hard on StyleGan for its horrifying menagerie of nightmarish cats.

"There's a lot more going on that the algorithm has to learn," Shane added.

Conflicting visual cues made it hard for StyleGAN to learn what a real cat was supposed to look like. And neural networks don't have real-world context for the information they're given; all they know is what's in their data sets. StyleGAN learned enough from the reference photos to accurately reproduce small-scale details and textures, like a cat's fur or the shape of a feline ear. But the program clearly struggled at putting the entire cat together, Shane said.