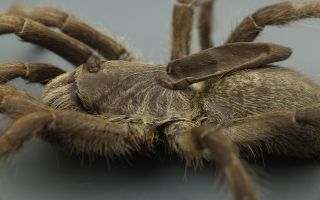 A close-up of the new tarantula species shows the "horn" that extends along the arachnid's back.
(Image: © Ian Engelbrecht)

A species of tarantula that was recently discovered in Angola has something in common with the mythical unicorn — a prominent "horn." But in the spider's case, the horn is growing from the creature's back.

The unusual arachnid belongs to a tarantula group known as horned baboon spiders. But in all other known species in this group, the "horn" is short and hardened. In the new species, however, the structure is elongated and soft, researchers wrote in a new study.

They collected eight individuals of the newfound species — now named Ceratogyrus attonitifer — from woodland habitats, during surveys conducted in southeastern Angola in 2015 and 2016. Its species name is derived from the Latin root "attonit," which means "astonishment," reflecting how surprised the scientists were to discover the remarkable arachnid, the study authors reported. [Creepy, Crawly & Incredible: Photos of Spiders]

Dense fur made of short, black hairs covers much of the tarantulas' bodies, which measure 1.3 inches (34 millimeters) long, on average. The long, floppy horns extending over the spiders' backs are in some cases longer than their carapaces (the back portion of their bodies), the scientists wrote. While the base of the horn is hard, the rest is soft and "bag-like" in the living spiders; in preserved specimens, it shrivels up and turns darker.

The horn is both astonishing and mysterious, as scientists have yet to learn what the spiders use it for, according to the study.

These tarantulas live in burrows that they dig among grassy tufts or in open sand; the tunnels descend vertically about 16 inches (40 centimeters) and terminate in a horizontal chamber. The spiders are very protective of their homes, "enthusiastically" attacking objects that the researchers inserted into the tunnels, according to the study.

While the spiders may have been new to the scientists, the creatures were already known to people in the region as "chandachuly" in the Luchazi language, the researchers said. Reports from indigenous people revealed that the spiders prey primarily on insects and that their venomous bites can lead to fatal infections in humans if the bites are not treated, the scientists wrote in the study.

Previously, spiders in the Ceratogyrus genus were known primarily from locations in southern Africa. The discovery of the previously unknown horned species means the range of these arachnids is nearly 250 miles (400 kilometers) larger than previously believed, suggesting that they are more widespread in the area than once thought, the researchers said.

The findings were published online Feb. 6 in the journal African Invertebrates.